Kareem Hunt, Who Has His Own Checkered Past, Speaks Out On The Status Of Deshaun Watson, Misses The Point Entirely 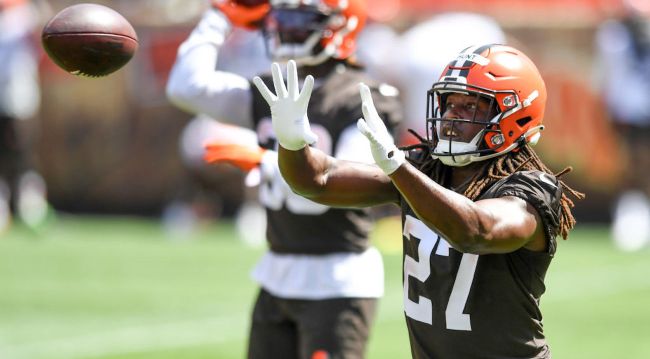 Earlier this week, embattled Cleveland Browns quarterback Deshaun Watson began his disciplinary hearing with the National Football League, with reports indicating that the league will see seeking to suspend the former Texans signal-caller for “at least” one season.

Speaking to reporters this week, running back Kareem Hunt — who has his own checkered past as he was cut by the Kansas City Chiefs back in 2018 after being seen on tape “brutalizing and kicking a woman in the head” — said that awaiting the league’s decision on Watson is “definitely stressful.”

“Yeah, it’s definitely stressful for them,” Hunt said, via Ashley Bastock of Cleveland.com. “It’s tough because they’re trying to figure out what pieces they’ve got for the season and what plays they want to put it. You know, there’s different plays for Deshaun and Jacoby, different playbook, different things we can do at quarterback.” [via ProFootballTalk]

What Kareem Hunt fails to realize is that this sort of uncertainty is *exactly* what the Cleveland Browns signed up for when they not only decided to trade for the 26-year-old Pro Bowler but sign him to a FULLY-GUARANTEED five-year, $230 million contract. Then again, it shouldn’t be all the surprising that the Browns decided to make a move for Watson as they signed the similarly controversial Hunt just a few years ago.

While Watson recently settled with 20 of his accusers, four of the women accusing him of sexual misconduct did not choose to settle.

RELATED: There Is A Belief That The Deshaun Watson Case Will Eventually Head To Court