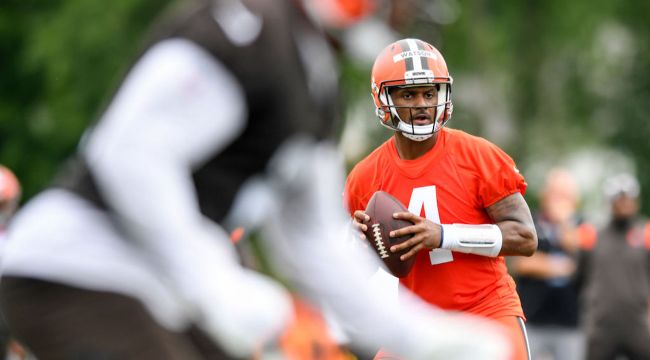 With Deshaun Watson’s disciplinary hearing with the NFL finally beginning on Tuesday, clarity on the embattled quarterback’s future is finally on the horizon, with reports indicating that the league will look to suspend Watson ‘indefinitely’ or for ‘at least one season.

According to Mike Florio over at Pro Football Talk, though, despite the fact that Watson has settled with 20 of the 24 women accusing him of sexual misconduct, he believes that the Watson case could still ultimately wind up in court.

While Tuesday night’s leak of a supposed willingness by the league to not appeal the decision if it lands within the range of a six- or eight-game suspension could be aimed at nudging Judge Robinson from making an unappealable decision that no discipline should be imposed, it’s also possible the league realizes that overturning her decision to impose six or eight games without a good reason for doing so amounts to jumping with both feet into a bear trap of litigation. [via Pro Football Talk]

With each passing week, the Browns’ — who sent three first-round NFL Draft picks to the Houston Texans for Watson, who they then signed to a fully-guaranteed 5-year, $230 million deal — decision to acquire the controversial signal-caller looks worse and worse.

Since trading for Watson, not only have more women come forward, but the New York Times published a bombshell report that alleged the 26-year-old met with 66 massage therapists over the course of 17 months.

RELATED: NFL World Reckons With Reports The NFL Will Look To Suspend Deshaun Watson For ‘At Least’ One Season