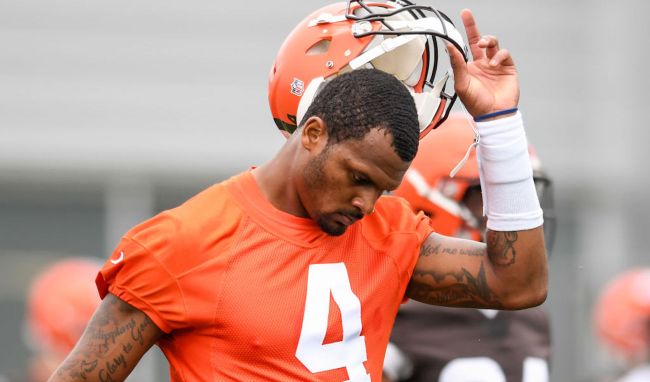 With Deshaun Watson’s disciplinary hearing with the NFL set to finally begin on Tuesday, reports about what sort of punishment the NFL will pursue have begun to leak out.

According to a report from the Wall Street Journal on Sunday, the NFL is looking to suspend Watson “indefinitely”, with the suspension “lasting for at least a year.” The report comes just a few days after Watson settled with 20 of the 24 women accusing him of sexual misconduct.

Following the bombshell report from the Wall Street Journal, NFL fans took to social media to react to the news, with a majority of the focus seemingly placed on the Cleveland Browns and the stupidity that led them to make such an acquisition.

If Deshaun Watson gets suspended for a year or more (and he should), I really feel for long-suffering Browns fans. I don’t feel for that organization – which made one of the most asinine signings in NFL history.

The Deshaun Watson signing may be the dumbest fucking thing I’ve ever seen. And the Browns richly deserve every bad thing they’ve got coming to them. Their fans don’t, but the organization does.

Baker Mayfield after Deshaun Watson gets suspended for the season pic.twitter.com/oSV7MWVB7W

i hope deshaun watson never plays another snap of football in the nfl. good riddance

Regardless of what ultimately happens with Watson this season, the Browns’ decision to invest the future of their organization in him feels dumber and dumber with each passing week.

Not only did the Browns send three first-round picks (plus a third-rounder and a fourth-rounder) to the Texans for exchange for Watson, and not only did they alienate former #1 overall pick Baker Mayfield, but they almost inexplicably signed Watson to a FULLY GUARANTEED 5-year, $230 million deal.

Even for an organization as infamously dysfunctional as the Cleveland Browns, if the NFL gets their way with the Deshaun Watson suspension, the team’s decision to acquire the QB might go down as one of the worst trades/contracts in the history of the league.