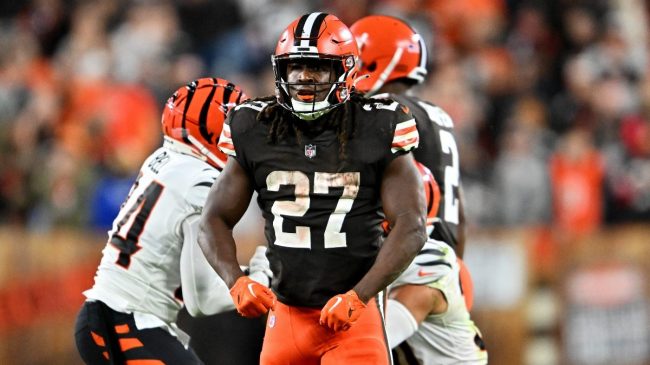 There were some surprising deals that went down before the NFL trade deadline came to a close. Additionally, some teams failed to make a move that many expected to happen. With that in mind, rumors are that Kareem Hunt is frustrated with the Cleveland Browns right now.

Kareem Hunt Reportedly ‘Not Happy’ With Browns Over Contract Talks

According to Sports Illustrated, “RB Kareem Hunt, who’s on the final year of his deal, is not happy with the team regarding how contract negotiations” have gone. Additionally, “that’s partly why his name was on the block before the trade deadline.” If that’s the case, then trouble might be brewing in Cleveland.

#Browns RB Kareem Hunt, who’s on the final year of his deal, is not happy with the team regarding how contract negotiations has went.

That’s partly why his name was on the block before the trade deadline, per SI. pic.twitter.com/IZRVJiGPCU

Considering how dominant Nick Chubb has been, the Browns have leaned on him more than ever. Kareem Hunt has become an afterthought in the rushing attack. With multiple teams in the league needing a running back, it’s surprising a deal couldn’t be reached. Now, Hunt remains in Cleveland on a contract that makes him a free agent in 2023.

The Browns running back has been vocal about wanting a new deal. However, nothing has come to fruition yet. Kareem Hunt’s contract is not in his favor, as it would suit him better to be locked up long-term.

We’ll see how it plays out. The Browns could potentially sign him to an extension. However, at this point, it’s hard to imagine that is the case. You’d think Cleveland would have been much more open to trade Kareem Hunt, as they have a plethora of talented running backs behind Nick Chubb.