Despite A Painful Injury, This Olympian Refused To Quit And Ran Through The Finish Line In An Amazing Tokyo Moment 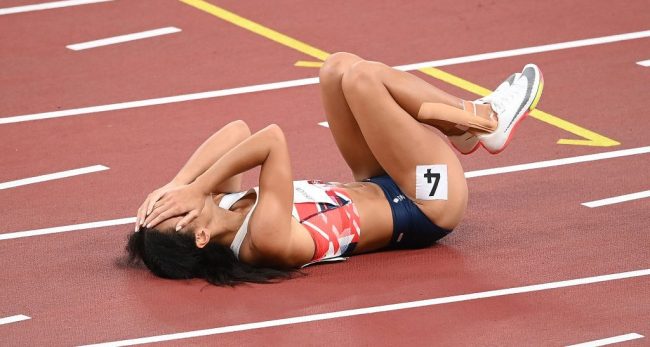 Katarina Johnson-Thompson had her Olympic dream tattered by a nightmare injury but refused to let it stop her from finishing. The 28-year-old Great British heptathlete ruptured her Achilles back in December but it was her calf that failed her in Tokyo.

After working back to full strength in less than 10 months, Johnson-Thompson downplayed her medal chances entering the Games. Even still, she was sitting fifth after three events and fully in the mix during her first full heptathlon since 2019.

And then disaster struck.

Johnson-Thompson came around the first stretch of the 200-meter race without issue. She suffered a different fate on the straightaway and collapsed in pain.

That didn’t stop her from finishing.

Medical personnel on the track tried to help her into a wheelchair, but she refused the help and rose to her feet. With a significant limp, Johnson-Thompson pushed across the line.

When she crossed the finish, Verena Mayr from Austria came up to embrace her. What a moment.

After suffering an injury, Katarina Johnson-Thompson refused to be helped off the track before crossing the finish line. #TokyoOlympics pic.twitter.com/J5GVl2lrVp

Unfortunately, because she left her lane when she fell, Johnson-Thompson was disqualified. However, though equally as crushing, it was one of the most incredible and inspiring scenes from the Tokyo Games.

It is moments like this that remind us as a collective population on earth that sometimes it’s bigger than the result. Finishing first is always the hope, but it’s often as valuable to finish at all.