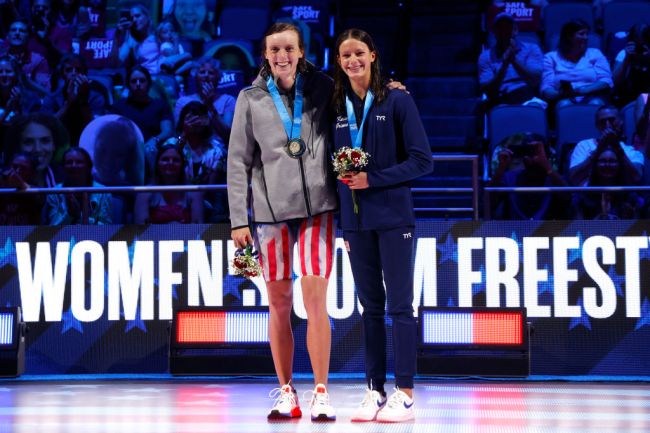 Katie Ledecky was the youngest swimmer on the U.S. Olympic team in 2012 and 2016, but the torch of youth has been passed to another Kaite— Katie Grimes. Grimes, who turned 15 years old earlier this month, punched her ticket to Tokyo on Saturday night in the 800-meter freestyle.

The second place finisher not only shares the same name, but she shares the same age. Just over five seconds behind Ledecky, Grimes touched the wall in 8:20.36. It was the third-fastest time in the 15-16 age group’s history.

Katie Ledecky and 15-year-old Katie Grimes are headed to the #TokyoOlympics in the women's 800m.@USASwimming | #SwimTrials21 x #TokyoOlympics

Ledecky, who has taken the young swimmer under her wing, was being interviewed after her win and called Grimes over.

“I told her after her mile the other day when she got third, ‘You’re the future,’ and I told her after that, ‘She’s the now,’” she said to the 15-year-old. “I think Katie-squared is going to crush it in Tokyo.”

15-year-old Katie Grimes will join THE Katie Ledecky at the #TokyoOlympics this summer. #SwimTrials21

After Katie Grimes became the youngest swimmer to qualify for the Olympics since Katie Ledecky, she met her team and family in the stands. Some moments are bigger than sports and this was one of them.

So many emotions for 15-year-old Katie Grimes after qualifying for the Olympics Games.@USASwimming | #SwimTrials21 x #TokyoOlympics

Grimes swims out of Las Vegas, but she’ll be packing her bags and heading over the Pacific Ocean to Japan in a matter of weeks.