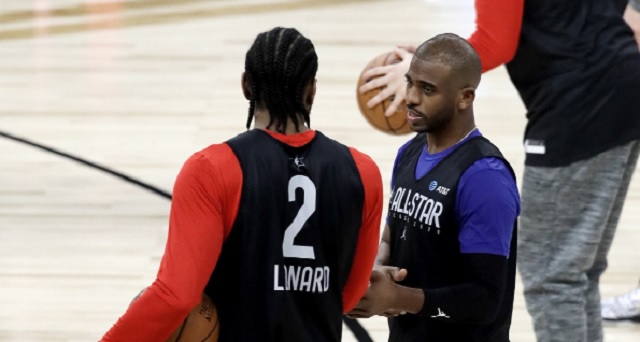 Chris Paul appears to be a hot commodity this NBA offseason.

On Tuesday it was reported that the Phoenix Suns were in trade talks to acquire the OKC Thunder superstar.

The Oklahoma City Thunder and Phoenix Suns are engaged in talks on a Chris Paul trade. @WindhorstESPN and @TimBontemps reporting on ESPN: https://t.co/ohOoKidWT3

The Suns aren’t the only team interested in Paul’s services, according to The Ringer’s Ryen Russilo Clippers’ superstar Kawhi Leonard reached out to Paul to come join him in LA despite the fact that the math doesn’t make sense for either party.

Via The Ryen Russilo Podcast

“The Clippers are definitely interested in Chris Paul,” . “The math doesn’t really make any sense and Paul has basically told any of the teams that are interested in trading for him, ‘hey, I don’t want you trading your player for me. I want to just come and join you,’ but that’s really hard when you’re making over $40 million a year and another year for $40 million plus for next year. So Paul’s not taking any kind of buyout for Oklahoma City to then try and make up the money somewhere else because I don’t know that the buyout would make a ton of sense for anybody involved, even if the buyout were really high and then Paul went ahead and made extra money.

“Here’s something that did surprise me because it just feels like Kawhi is this distant, mythological creature that doesn’t talk with anybody. Apparently, Kawhi reached out to Chris Paul immediately and was like, ‘hey, you should come here.’ So that part is real, the pursuit is real, the interest and the math on it from Paul’s standpoint doesn’t seem to be all that realistic.”

Chris Paul is currently owed a bit over $40 million for the 2020-21 season and has a player option for the 2021-22 season worth $44 million which makes it unlikely that he’s either going to opt-out or receive a buyout from the Thunder. Paul may eventually get traded but it’s going to be a complicated move to make the money match.