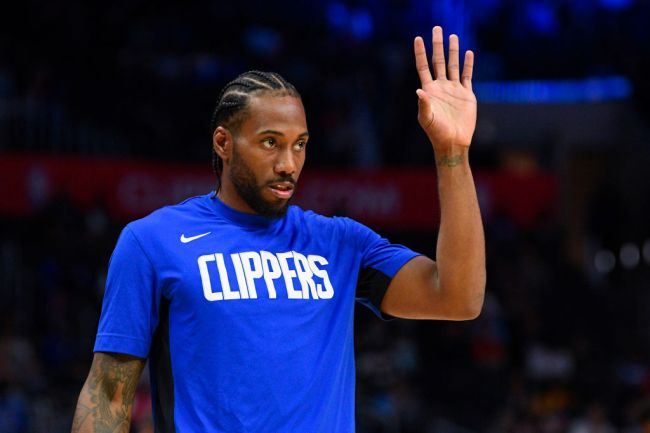 Kawhi Leonard’s hands are about the same size as a small car, NBA fans have known this for quite some time, but the two specimens deserving of their own zip codes never cease to amaze us. On Monday night The Klaw made his presence felt in clutch time during the Clippers’ 113-107 Game 3 win over the Nuggets.

With 1:47 left in the fourth quarter with Denver down six points, Jamal Murray decided to drive in the lane and go up for a dunk only to be met by Leonard’s middle finger. When we say his middle finger made the block on Murray’s dunk, it was literally just his middle finger.

The photos are absolutely incredible and funny at the same time. Leonard’s middle finger looked like it extended from his hand like a cat’s claws to make the block. In his postgame presser, Paul George said “that’s an extra-long middle finger, like, it kept growing or something. That’s Kawhi, man.”

The Kawhi Leonard block on Jamal Murray should be the new middle finger emoji 😂 pic.twitter.com/FDG5HkbuDT

That is not a normal middle finger. Then again, Leonard isn’t a normal dude and his hands are the complete opposite of normal. Los Angeles could honestly look back in a few weeks and circle this point, the point of Leonard’s middle finger, as a title-defining moment.

Leonard finished the night with a pair of blocks, but none were bigger than the middle finger denial.

The Clips grabbed a 2-1 series lead after their four-point win over the Nuggets on Monday night.