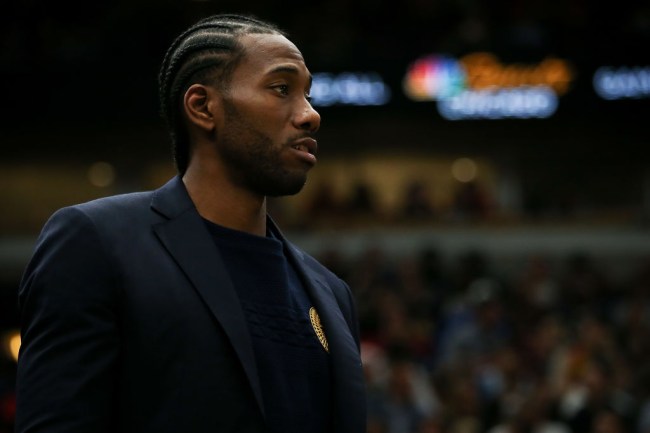 The NBA offseason has had more than a few compelling storylines but I don’t think anything tops the saga of Kawhi Leonard.

Leonard’s issues with the San Antonio Spurs ultimately led to him asking for a trade and there was plenty of speculation that his goal was to team up with LeBron (which turned out to not actually be the case because almost every NBA rumor is a lie).

When everything was said and done, Leonard was exiled to Toronto, making Gregg Popovich the equivalent of the dad who sends his misbehaving son to military school for a year to teach him a lesson.

After threatening to sit out the season, it appears Leonard is willing to give it his all and is currently getting ready to lead the Raptors to a championship— or, more realistically, a winning record and a first-round playoff appearance.

On Tuesday, Leonard was spotted practicing with one hell of a squad at a UCLA gym, but there was only one thing people really cared about: Kawhi’s giant hands.

Apparently there was an interesting workout at UCLA today… pic.twitter.com/WglSlSec1a

When I first saw that picture, my initial thought was that Kawhi is basically Uncle Jack from It’s Always Sunny in Philadelphia, a character who’s prosthetic giant hands are responsible for one of the funniest scenes in the history of the show.

My second thought was that he’s the opposite of the Tiny Hands Guy from that Burger King commercial from a while back.

Of course, the internet was quick to make jokes of their own, and there was no shortage to choose from.

What on Earth
Only a matter of time until Kawhi’s hands complete their evolution and he can palm the CN Tower pic.twitter.com/efN63jLU0u

Kawhi Leonard’s hands are considered a weapon in some states.

I always knew Kawhi had huge hands, but this photo puts it into perspective. Next to him, Kevin Durant's hand looks like Deadpool's hand when it was growing back. 😂🖐️ pic.twitter.com/sCqo8iGicm

If you’re interested, here’s the tale of the measuring tape.

For some additional perspective, here’s what Leonard’s hand looks like when you compared it to Shaq’s.

I’m sure Kawhi’s thrilled to now live in a place where he needs to wear gloves.