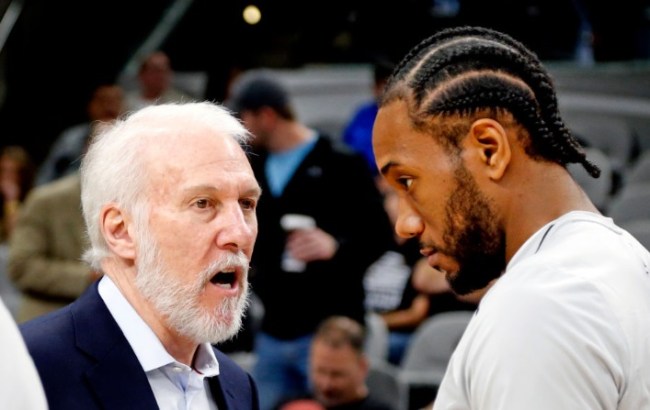 For the past few months, Kawhi Leonard has made things impossible for the San Antonio Spurs when he requested a trade to the Lakers. The Spurs eventually were able to trade Leonard to the Raptors despite Kawhi making it clear that he didn’t want to play in Toronto.

Toronto has reached agreement in principle to acquire San Antonio's Kawhi Leonard for package that includes DeMar DeRozan, league sources tell ESPN. Trade is larger on both sides, and players are still being informed of their inclusion in the deal. Trade call with league today.

Toronto’s first-round pick to San Antonio is a protected 1-20 selection. After one year, it becomes two second-round picks.

Raptors president of basketball operations Masai Ujiri is taking a significant risk in pursuing the trade. Ujiri will make the deal with a determination that he can sell Leonard on re-signing with the Raptors next summer in free agency, sources said. Toronto would be able to offer Leonard a five-year, $190 million contract next summer. If Leonard left the Raptors, he could sign a four-year, $141 million deal with a team with the available salary-cap space.

The Internet thought it was pretty funny that Popovich would send Leonard a different country rather than to trade him to LA.

Gregg Popovich "Did you say Toronto? It sounded like you said Toronto."

Kawhi Leonard “no I sai-"

Live look at Gregg Popovich after sending Kawhi to a place completely opposite of L.A. 😂 pic.twitter.com/Ggx9ulhRcP

Gregg Popovich sends Kawhi Leonard off to Toronto after trading him: pic.twitter.com/tL5rwLs8zD

Gregg Popovich is so petty that he just exiled Kawhi to another country. Not gonna lie, I’m kind of impressed.