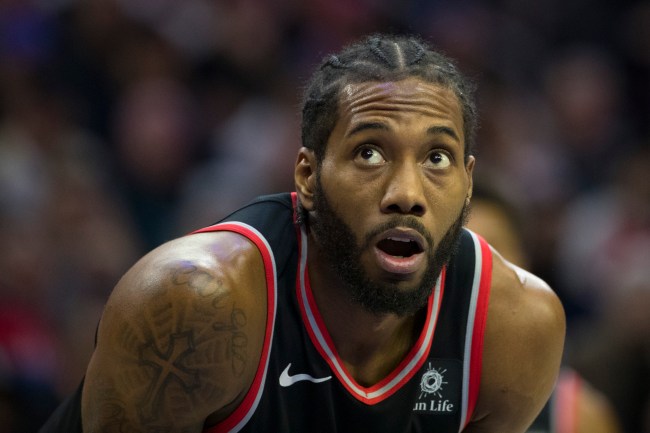 Kawhi Leonard is an absolute stud on the basketball court, so it’s not surprising that he’s getting his own signature shoe. While the brand who gave him the shoe, New Balance, might have been a shock — Kawhi split from Brand Jordan last year — as the Internet roasted the partnership when it was first announced, the fact that he’s the company’s biggest star means they can focus most attention on him.

And, as I wrote about yesterday, the first look at New Balance’s marketing strategy for Kawhi Leonard seems pretty dope. Not only did they come in hard with a badass ad with the Toronto Raptors All-Star, but they utilized his entire personality by not having Leonard say a damn word. If that’s not brilliant, I don’t know what is.

After the ad dropped from New Balance yesterday, plenty of people were interested in seeing what the design of Kawhi Leonard’s signature show might look like. Thankfully, we didn’t have to wait long to see, with the brand giving us a little tease today of the different editions to expect, via New Balance’s Instagram account.

Named the OMN1S, Kawhi Leonard will be debuting his first signature New Balance kicks at this weekend’s NBA All-Star Game, so we’ll have a better idea as to what they’ll look like on the court then. My initial reaction? Amazing.

While the brand killed it with the ad yesterday, the design of the shoes are a little bit old school with the back upper. The fact that they feature the player’s full name, Kawhi Leonard, across the top is a nice look, too. It’s just the simplicity of them that makes them so different than the other looks that superstars are always wearing.

As for Twitter reactions, well, they seemed mix. Some argue that the font on the shoes are too Microsoft Word-like, or that the Kawhi Leonard logo is too boring. Others agreed with me that they look kind of cool. Here’s what some were saying about the shoes.

Somebody’s given them Steph 2’s and ZO2’s a run for their $$$ pic.twitter.com/Bz9a3dufbd

Those logos are so lazy

Minus the terrible logo and fonts they are not too bad, better than the puma joints

Hey, not everyone’s going to agree on things, so I guess the verdict’s still out on if these Kawhi Leonard kicks are worth getting.