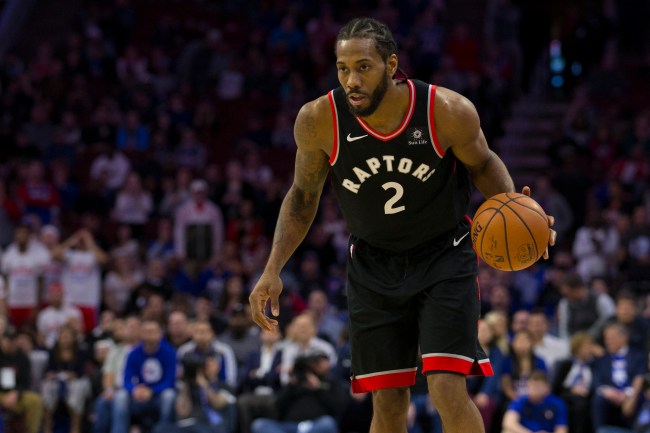 Kawhi Leonard is a man of few words. While the Toronto Raptors’ star is one of the best players in the NBA, the three-time All-Star isn’t one to mention himself among the greatest in the league — but mainly because he rarely speaks. In fact, the only time many of us have ever seen Leonard show any emotion at all was in his introductory press conference after being traded to Toronto this past summer when he actually laughed, prompting memes and social media mania.

While Kawhi Leonard might not promote himself like other superstars in the NBA, it’s been working just fine for him. And, just because he doesn’t run his mouth, doesn’t mean that he’s any less a competitor than say Kevin Durant, Russell Westbrook or Joel Embiid, who regularly seek attention through the media. No, for Leonard, just playing the quite assassin fits him OK.

Playing off that whole quiet role, New Balance — the company Kawhi Leonard signed an endorsement deal with last year — decided that it’d be best to let the guy be himself in the first ad he did with the brand. The result? Pure awesomeness, with the message being that Leonard just lets his play do the speaking for him. Take a look at the video below.

Kawhi. NB Hoops. We Got Now.

Who says you need words to deliver a pretty powerful message? Not New Balance — nor Kawhi Leonard — who doesn’t say a single word in the ad above. It’s incredibly well done and natural.

Sure, there are other athlete commercials that tout big music and highlights, where players show-off for the camera, but that’s not Leonard’s style. So it’s really cool to see New Balance keep things simple (and quiet) while allowing Kawhi come across as himself, so this first ad definitely gets an A grade in my book. Why try to make the guy someone he’s not?