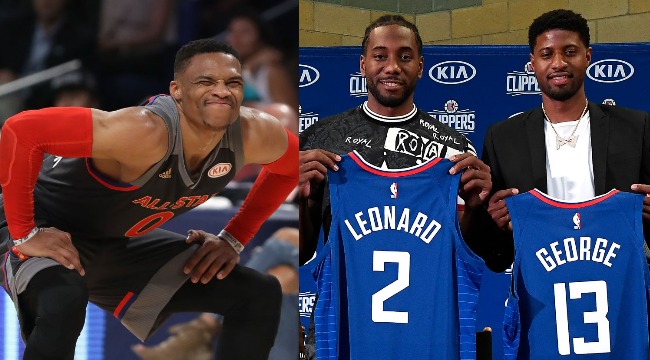 In 8th grade, I asked Christine Kensington to the middle school formal. She reluctantly said yes, one week before I caught wind she committed to popular guy Paul Doogan. She didn’t even have the backbone to ruin me to my face. I still think about it in the shower from time to time when I’m feeling low on myself.

Russell Westbrook got Christine Kensington’ed by Kawhi Leonard in the summer of 2019, when Leonard had ascended to the most popular girl in the school following a 2019 NBA title with the Raptors.

According to an ESPN piece by Ramona Shelburne, Westbrook was bullish on teaming up with Kawhi in Los Angeles. His dreams were not only shattered, but he was used as a pawn for Leonard to secure Westbrook’s then-teammate Paul George.

Westbrook had become a father of three the previous November, and while he’d made a home and carved a Hall of Fame legacy in Oklahoma City, the chance to live and play in Los Angeles, where grandparents and his large extended family and friends could visit every day, held deep appeal.

Teaming up with Leonard would be the fastest way there, so he placed the call, according to multiple sources. But Leonard didn’t just take the call as one native son of Los Angeles to another, ponder it and file it away.

According to multiple sources, Leonard then called Westbrook’s teammate in Oklahoma City, Paul George, and told him he’d rather team up with him on a homecoming.

George had always longed to play in front of his family as well but had formed a close bond with Westbrook in their two seasons together in Oklahoma City and was content to stay.

To add insult to injury for Westbrook, Kawhi had already reached out to Jimmy Butler and Kevin Durant for a potential collaboration before setting his eyes on George, who at the time had three more years on his contract and two before a player option.

Westbrook, now 32, is hitching his hopes on an aging LeBron-led Lakers team in an attempt to secure his first NBA title in his 13-year career. Buckle up.