The Kawhi Leonard ‘WHAT IT DO, BABYYYY” Meme Is One Of The Funniest NBA Memes Of The Year 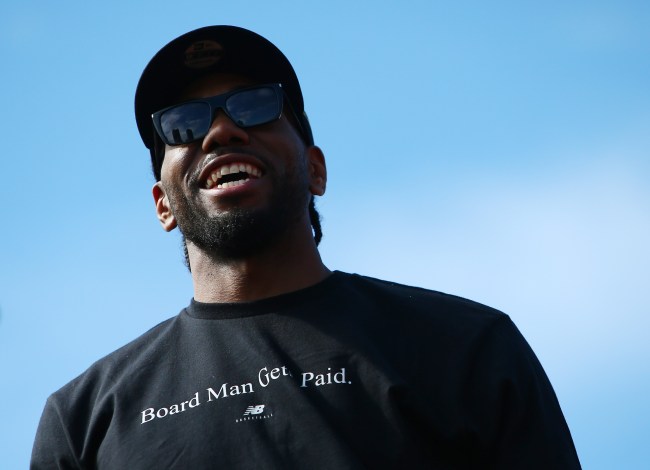 There’s no doubt that phrase has been uttered thousands of times in the past couple weeks across Canada as its citizens orgasm. I’m surprised we haven’t seen any “WHAT IT DO, BABIEEEEEE!” tattoos from our friends up north.

Nick Nurse went on the record to squash the public opinion that Kawhi Leonard is actually a robot and described the two-time NBA champion as ‘the funniest guy in the film room,’ while citing an incident when Nurse attempted to pump his team up before a playoff game by telling war stories from his D-League coaching days. Nurse claims that Kawhi jumped in in the middle of the story and said, in a monotone voice, ‘The D League? I’m done listening to this story.’ RICH!

“WHAT IT DO, BABIEEEEEE!” is an extension of that seldom revealed personality, and the saying proved to be a lovely meme template as we are on the cusp of what promises to be a wild free agency.

Let’s all laugh before some of our fanbases cry.

When a baby hands u a toy and u have no idea what it does pic.twitter.com/75fwWQgy4m

Bucks: *have COY, MVP and executive of the year*

When she remove all the boyfriend pictures and start tweeting men ain’t shit. pic.twitter.com/Hc4upfxRlS

*typing an essay on Windows 97*

Kawhi when he saw another Lakers max slot open uppic.twitter.com/cSx3Wqauje

Me coming home to my girlfriend after I struck out for the night:pic.twitter.com/Wx6V9mtQuI

When you create the max cap space that Woj said you wouldn’t be able to create and get the meeting with Kawhi when Woj said it was a two-team race between the Raptors and Clippers pic.twitter.com/NfN99TLovx

Kawhi pulling up to Space jam 2 filming with Lebron and AD after seeing Lakers created a max contract slot pic.twitter.com/0GWBPEi3oa

Me breaking out my Miami LeBron #6 jersey:

I think there’s only one thing left to be said here: WHAT IT DO, BABIIIIIIIE!