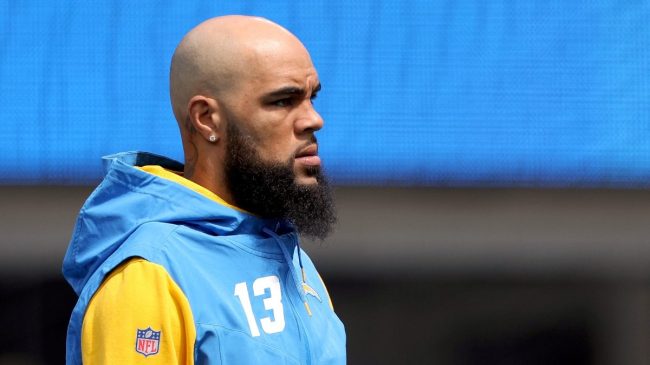 The Los Angeles Chargers held off the Cleveland Browns for a big win in Week 5. However, all of the attention is on head coach Brandon Staley for his questionable decision-making. LA could have lost the game due to an odd fourth-down call and it appears Keenan Allen is not a fan of it at all.

Covers shares a quick clip of the failed fourth-down conversion. It was odd seeing the Chargers lineup and go for it. Especially considering they were up by two points, in their own territory, and had just over one minute left on the clock. The Browns should have won this game due to Brandon Staley’s decision, but Los Angeles got lucky as Cleveland missed the kick.

Brandon Staley decided to go for this.

Check the time and score. 🤔🤔🤔 pic.twitter.com/3gg11inhyW

Keenan Allen was ruled out with an injury and was watching the game as a spectator like the rest of us. Typically we don’t see players openly criticize their team, but Allen couldn’t help himself. The Chargers receiver is as confused as everyone else, as a punt would have made substantially more sense in that situation.

WTF are we doing?

Luckily for Staley, LA won the game. For that reason, his decision to go for it on fourth down may be overlooked in the long run. That seems to be what Keenan Allen indicates in his next tweet.

So glad he missed that. Cause man man man

Either way, Chargers fans are not happy with the call. Most of them seem to agree with Keenan Allen. With that in mind, all eyes will likely be on Brandon Staley throughout the remainder of the season. If he can put this play call behind him moving forward, perhaps the fan base will eventually forget this blunder against the Browns.

If not, well, then the fans may just be over Staley as head coach.