Kelly Oubre Jr. Reacts To Being Called A ‘Bum’ By Drake During Game 2 Of Raptors-Wizards Series 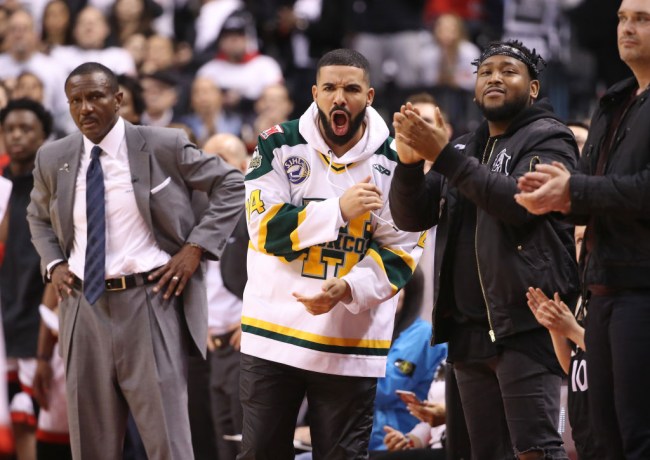 Last night, the Washington Wizards got drubbed by the Toronto Raptors from start to finish in game 2 of their opening round playoff series.

To make matters worse, rapper Drake, who is an avid Raptors fan, spent the night talking to trash to Wizards players from his courtside seat.

.@Drake talking that talk to John Wall from the sidelines 😂 pic.twitter.com/MFoaqwvWcD

Drake went even as far to call Wizards guard Kelly Oubre Jr. a “bum” as he ran up the court during the game.

Oubre was asked about Drake’s trash talking and he seemed pretty cool about the whole thing.

At the end of the day, he is a great rapper, I listen to him in my headphones, I have no beef with him. I just think it’s pretty cool that my name is mentioned in the same conversation as his.”

Oubre threw plenty of words back at Drake, and hung 14 points on the Raptors, but the tape never caught that.

“The camera got him saying I was a bum, but at the end of the day, it didn’t see me shoot a three right after that, so it is what it is. It’s all fun and games. He’s a fan and he’s coming to support his team, and I’m just coming to play. At the end of the day it’s all love,” Oubre said.

Unfortunately for Oubre and the Wizards it looks like Drake is going to get the last laugh because Washington kind of sucks and it looks like their going to make a quick exit from the playoffs this year.