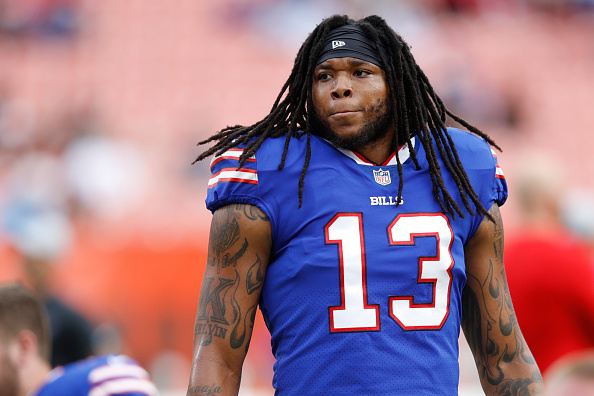 Bills wide receiver Kelvin Benjamin has only recorded two catches in the last two weeks for the team but it doesn’t seem like he’s interested in putting in a little extra work with his QB.

Before today’s game it was reported that Josh Allen extended an offer to Benjamin to “work on routes” before the game but the Bills wide receiver quickly shut down the rookie QB by saying “no”.

Kelvin Benjamin continues to be one of the biggest doofuses in the league. https://t.co/uZMkIBITnf

If I’m the bills I bench kelvin for this. Maybe even cut him.

Bench that Kelvin Benjamin bitch down for he doesn't deserve a place on the team anymore!

josh allen: hey man, just seeing if you wanted to work on some rout-

Kelvin hasn’t prepared himself for anything other than the buffet

Kelvin Benjamin is fat, lazy, and trash😂 this doesn’t surprise me https://t.co/4Ncv6XOc00

It’s Sunday so here is your weekly reminder that Kelvin Benjamin is fat & a horrible WR that blames everyone except his diet.

Earlier this season Benjamin caused a bit of controversy when he blamed his early career struggles on former teammate Cam Newton.

I mean, I felt like I would’ve been even more successful if … I don’t know, man … If I would’ve … Looking back on it, I should’ve just been drafted by somebody else. I should’ve never went to Carolina. Truly, I just think Carolina was bad for me. It was a bad fit from the get-go.

If you would’ve put me with any other quarterback, let’s be real, you know what I’m saying? Any other accurate quarterback like Rodgers or Eli Manning or Big Ben — anybody! — quarterbacks with knowledge, that know how to place a ball and give you a better chance to catch the ball. It just felt like I wasn’t in that position.