Will Kelvin Gastelum Give Darren Till A BMFing Welcome To The Middleweight Division At UFC 244? 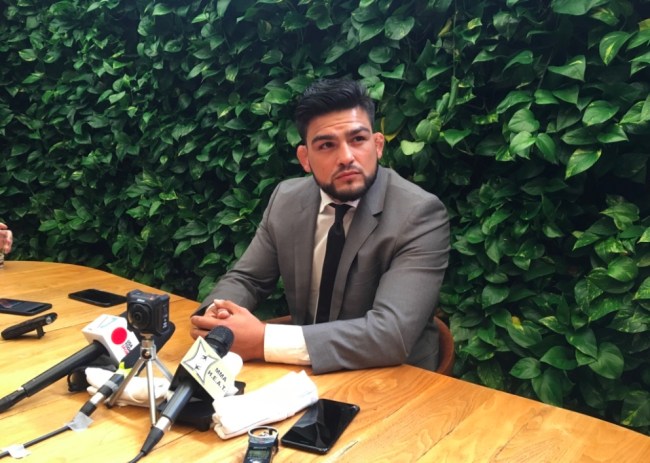 It most certainly is.

For the hardcore MMA fans out there, fighters like Gastelum and Till are well known commodities. They’re a pair of former title challengers who can throw some hands — hella hands — and routinely deliver exciting fights and fantastic finishes. They’re exactly the type of fighters who can set the table for a main event as superb as Jorge Masvidal vs. Nate Diaz.

However, mixed martial arts newbs may not be too familiar with Gastelum and Till, so here’s the rundown on their upcoming UFC 244 co-main event, which airs live from Madison Square Garden on the Pay Per View main card on ESPN+.

Kelvin Gastelum is Coming off the 2019 Fight of the Year

It’s been a pretty crazy year for Kelvin Gastelum.

Expected to fight for the UFC middleweight title in February, his title shot was put on ice after then-champion Robert Whittaker was forced to withdraw from the bout the morning of the event. Two months later though, well, Gastelum was one half of the 2019 Fight of the Year (results pending), when he went five rounds with current UFC champion Israel “Stylebender” Adesanya in a losing effort. That fight was, as they say, straight fireworks, with Gastelum eating shots to pressure his way inside and use his boxing to tag up “Stylebender.” It was such a rad fight, you might want to fire up ESPN+ and watch it right now. Seriously.

Anyway, back to this upcoming UFC 244 co-main event …

Gastelum is a pressure fighter, a guy who comes forward at all costs to impose his offense on opponents, boxing up the opposition before transitioning to the wrestling game. It’s a style that has worked for him thus far, helping Gastelum not only win The Ultimate Fighter, but also amass a 10-4 (1 NC) record in the UFC, winning six fight night bonuses, including in each of his last three bouts. Those are pretty impressive numbers for a guy who debuted in the UFC when he was just 21 years old.

Also impressive has been Gastelum’s ability to find continued success while moving up a weight class, which is of particular intrigue for this fight against Till.

UFC 244 is a major crossroads, and turning point, for former welterweight title challenger Darren Till. Coming off a pair of losses (the only two defeats in his professional career), Till is making his middleweight debut as the co-main event of the UFC’s BMF PPV card on ESPN+. It’s a big time fight, and the UFC is giving Till and enormous platform to showcase his new form in a higher weight class.

Till was always a massive welterweight. He even joked on numerous occasions about how it should be illegal for him to fight at 170 pounds because of how much bigger he was than his opponents. And then he started missing weight.

In mixed martial arts, and combat sports in general, missing weight is a huge deal. It can show weakness in fighters, or lack of professionalism. It can also lead to fights being cancelled, which is a major faux pas, and while Till never had a bout scrapped for missing weight, he failed to hit his targeted weight on a pair of occasions in the UFC, which is a big reason why many have wanted to see him at 185 pounds for so long. He’s clearly big enough for the division, now it’s time to see how his Muay Thai and pinpoint striking translates to middleweight. It will also be of particular interest to see how Till’s takedown defense holds up against Gastelum.

This very well could be Darren Till’s major re-invention and career rejuvenation, but it’s a seriously risky fight. Seriously risky.

The Irony of Gastelum vs. Till

With Till’s move in weight expected to be a major talking point on UFC 244 fight week, it’s important to note that three years ago, Kelvin Gastelum was in the same exact position. He was a welterweight struggling to hit his mark on the scale, thus taking major heat from the UFC and the fans.

And then it all came to a head in New York City, for a major Pay Per View event at Madison Square Garden.

Expected to face Donald “Cowboy” Cerrone on the UFC 205: Eddie Alvarez vs. Conor McGregor main card, Gastelum never even made it to the weigh ins because, well, reports stated that he wasn’t even within 10 pounds of the contracted weight limit: the bout was cancelled, the UFC was ticked, and Gastelum never fought at welterweight again.

Moving up to middleweight a month later, Gastelum has looked better than ever at 185 pounds, but it’s still a bit ironic that a fighter like Till, who repeatedly struggled to make weight, will debut in a new division against a fighter who had many similar demons.

Let’s see how it all goes down at the BMF weigh ins before Gastelum and Till go at in on the UFC 244 PPV main card on ESPN+, the 500th event in UFC history.