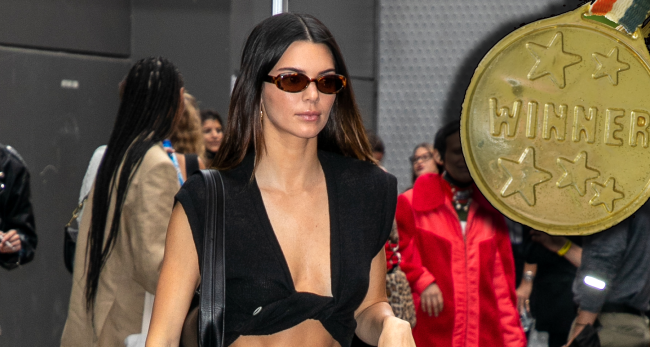 File this one under “celebrities lives are nothing like ours.” 24-year-old Phoenix Suns star Devin Booker, having returned from Tokyo after winning the gold medal with Team USA Basketball, is taking a lake vacation with his model girlfriend Kendall Jenner.

As if that wasn’t enough proof that their lives are far different from the average person’s, in a series of photos posted to Instagram by the 24-year-old NBA player, Kendall Jenner is seen lounging on a boat, drinking a beer, and wearing a bikini with Booker’s Olympic gold medal draped around her neck.

Of course, Olympic gold medals are nothing new for Kendall as her dad Caitlyn Jenner won a gold medal in the decathlon at the 1976 Olympics in Montreal.

The photo is also notable for being one of the very few times either Jenner or Booker have shared pictures of one another on social media. They were first linked as a couple back in April 2020, but not publicly confirming it until Valentine’s Day 2021.

Jenner, 25, who has been linked to numerous NBA stars over the years, including Booker, Ben Simmons, Kyle Kuzma, D’Angelo Russell, Jordan Clarkson, Blake Griffin, and Chandler Parsons, defended her dating choices on a Keeping Up With The Kardashians reunion show this past June.

“No, I don’t actually only date basketball players, if anyone’s ever done their research,” she said. “I’m not ashamed that I have a type, and I’m also a genuine basketball fan.”

As for why almost none of them ever appeared on the show with her, she says that was her decision.

“No offense to my older sisters at all, but I think that Kylie and I specifically have had the opportunity to watch our older sisters go through marriages and relationships and breakups and do them pretty publicly. It was a personal preference from a really young age,” said Jenner.

“I think it makes my life a lot easier and our relationship a lot better, to be honest. I just feel like it’s a private matter and not for anybody else to judge or know.”

As for whether wedding bells are in the couple’s future, they claim to not be in any hurry for that.

“They’re not putting any sort of pressure on things for the future,” a source told ETOnline.com. “They realize they’re both still young and have big futures ahead of them. Right now they’re just enjoying their time together and taking things as they come.”

As the new lake photos and their Instagram stories clearly show, Devin Booker and Kendall Jenner are most certainly enjoying their time together.