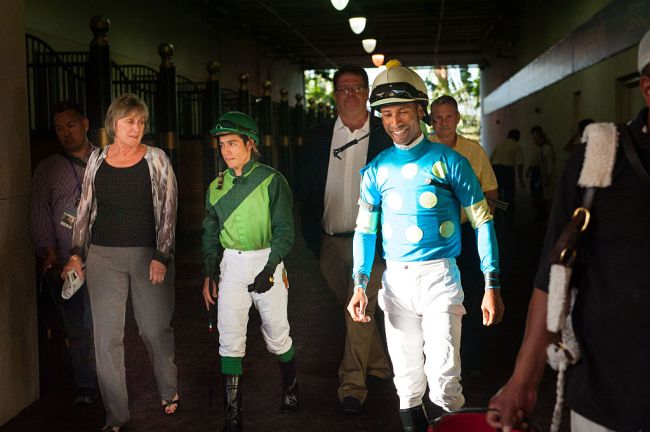 Horse racing used to be synonymous with Black jockeys, but now Kendrick Carmouche is one of the few remaining in the sport. Black riders jockeyed 13 of the 15 horses in the first-ever Kentucky Derby in 1875 and won 15 of the first 28 races. On Saturday, Carmouche will be the first black jockey in the Kentucky Derby since 2013 and one of only a few in the last 100 years.

The 37-year-old from Louisiana is the son of a jockey and started riding as soon as he could walk on his family’s Shetland ponies in cajun country Louisiana. At the age of only 13, he strapped up in the saddle atop a thorough bred and ran his first race at Acadiana Downs. He has since won more than 3,400 races and earned $118 million after starting his professional career in 2000.

His father’s story is pretty unbelievable. Sylvester Carmouche lost his license to ride after pulling a gutsy stunt during a fog-covered race in the last century. On January 11, 1990, a thick fog settled on the Delta Downs racetrack in Louisiana. Seated in saddle, it was hard for Carmouche to see the nose of his own horse, let alone anything else that was going on. As a 23-to-1 long shot, Carmouche and his horse Landing Officer nearly tied a track record and won by almost 25 lengths. However, after the race, the track veterinarian noticed that neither the horse nor the jockey were dirty or tired. Carmouche was accused and later found guilty of taking Landing Officer out of the race, hiding in the fog while the other horses raced around the track, and then charging back into the field ahead of the pack on the final stretch. He was suspended for 10 years.

Kendrick Carmouche has never seen his father as “The Fog Jockey,” instead seeing him always as a P.h.D. in horse racing and as a man he called “Pops.” That man taught his son everything there is to know about the sport and now will pass his legacy on to Kendrick as he tries to become the first Black jockey to win the Derby since 1902.

“Look, I’m 37 years old and I’ve covered a lot of pavement, put in a lot of hard work and stayed positive through hard times,” Kendrick said to the New York Times. “I learned all that from my Pops.”

Carmouche is a rarity in a sport that is now dominated by jockeys from Latin America and joins Marlon St. Julien as only the only American-born Black jockeys since 1921. History is everywhere and the inspirational man chasing it knows what’s on the line.

To make Carmouche’s story even more incredible, he came back from a broken leg three years ago and earned a spot in the Kentucky Derby with a significant underdog win. Earlier in April, Carmouche rode Bourbonic in the Wood Memorial at Aqueduct and trailed all eight horses for the first mile. They were dead last by a long way. It wasn’t even close. At 72-to-1 odds, Bourbonic and his jockey surged on the final stretch to win by a nose. It was a remarkable comeback.

When Saturday’s race at Churchill Downs goes off, Bourbonic will run from the 20th post position at 24-to-1 odds. If Carmouche were to bring him across the finish line as the winner, it would not only be an upset, but a historic one at that. Kentucky Derby festivities will run all day on Saturday but the big one will start around 5:10 p.m. EST.