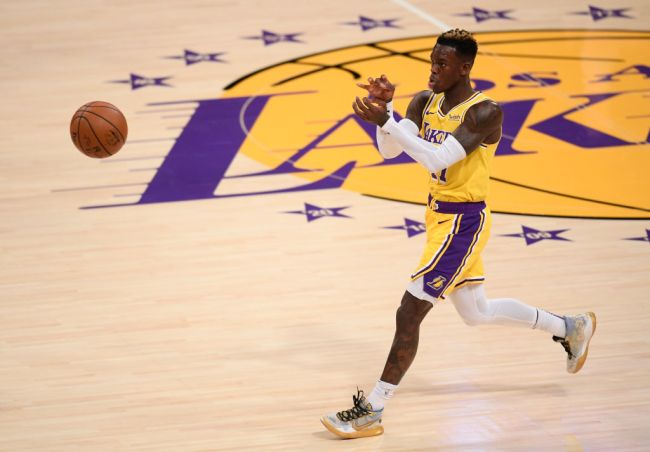 The Los Angeles Lakers were horrendous on Tuesday night in their 30 point loss to the Phoenix Suns and find themselves in a world of trouble down 3-2 in the series. While not having Anthony Davis available didn’t help the Lakers’ cause, neither did Dennis Schroder’s play on Tuesday night.

The Lakers guard went a cool 0-for-9 from the field, which included four missed three-pointers, to lay a goose egg in Game 5. His zero points were accompanied by four rebounds and just one assist.

Kendrick Perkins was quick to point out Schroder’s stat line, or lack thereof, and roasted him on Twitter essentially laughing at the fact that he turned down a massive payday and then laid an egg in one of the biggest games of his career.

The nerve of him turning down 80 plus million! I mean the audacity. https://t.co/NpGGZJHd2L

I realized tonight that the Lakers have other agendas and Basketball is not one of them. I have to give credit to the Suns tho…they showed up and showed out! https://t.co/WU9nrzgUii

The Lakers reportedly offered Schroder a four-year, $84 million extension which he turned down so he could essentially bet on himself and show his worth this season. While he’s been solid for the majority of the year, his Gam 5 summary certainly sticks out, and not in a good way.

The last two games in the series against the Suns haven’t been great for Schroder as he managed only eight points in Game 4. Then you have his flop in Game 3 that got Devin Booker ejected from the game that caught the attention of everyone.