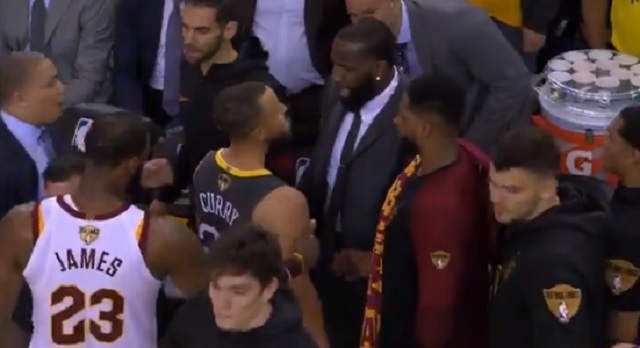 Steph Curry might want to watch out who he messes with. During game 2 of the NBA finals, Curry got in Kendrick Perkins’ face after tripping over the Cavs big man’s legs on the sidelines.

Thanks to a close-up video we now know exactly what Curry told Perkins.

During game 1 of the finals, Warriors forward Draymond Green also got into it with Perkins when he mocked Perk who was cheering his team on from the bench.

Today, Perkins spoke to the Boston Globe and he wants to let Steph and the Warriors know that they should probably go and mess with someone else.

The Warriors were annoyed with Perkins, who told the Globe he does not understand why anyone would want issues with him, perhaps one of the most intimidating players of this era.

“I don’t know why people keep wanting to pick battles this way,” . “Might want to choose that [expletive] wisely, man, [rather] than [bleeping] with me. I don’t think I’m the problem that they want, though, might want to pick another battle.”

Perkins has not played any games in the playoffs but he’s already been involved in a handful of beefs during the postseason. Ty Lue is going to have to unleash Perk this series just to see what happens.