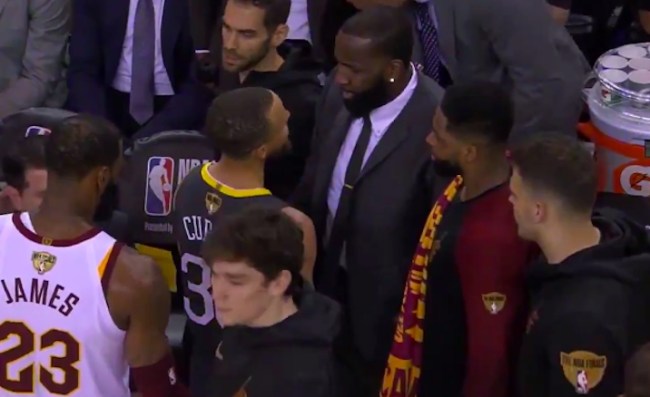 You can be certain as the day is long that Kendrick Perkins will always find a way to be an irritator. During the Raptors series, Perkins nearly dropped the gloves with Drake following his team’s Game 1 win. And most recently, many believe he tried to injury Steph Curry after Steph missed a three near the Cavs bench. The 6’10” Perkins refused to move his long legs and clashed knees with an unsuspecting Curry.

When the incident was brought up after the game, Curry said “No comment,” but it likely lit a fire under his ass–seeing as he poured in 16 of his game-high 33 points and was a perfect 5-of-5 from three in the fourth quarter.

A Redditor slowed down the tape of the exchange and it’s clear as day what Curry said to the Cavs sidelined big man.

Ouch. No, Kendrick wasn’t playing that night or really any other for that matter. The 33-year-old was sidelined for all but one regular season game and hasn’t been active for one playoff game. It’s gotta be eating him up to watch LeBron carry an inferior roster to its ultimate demise.