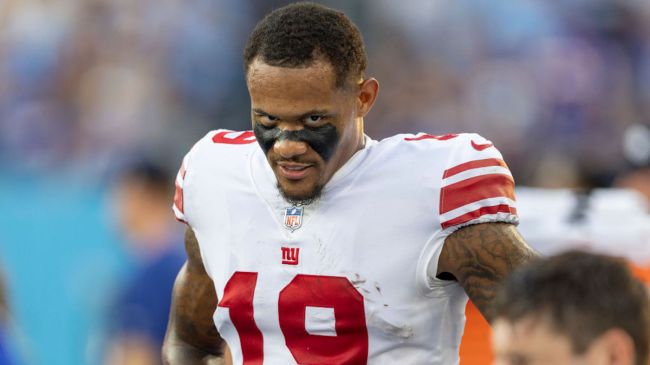 New York Giants wide receiver Kenny Golladay has been a massive disappointment ever since the G-Men gave the now 28-year-old pass catcher a 4 year, $72,000,000 contract back in 2021.

During his career in the Big Apple thus far, Golladay has caught just 37 passes for 521 yards and zero — yes, ZERO — touchdowns. It doesn’t look like 2022 is going to be much better for Golladay, either, as new Giants head coach Brian Daboll has barely let the former Detroit Lion see the field.

Golladay did, however, play a few snaps on Monday night against the Dallas Cowboys, but unfortunately for him, his contribution (or lack thereof) did nothing but remind NFL fans just how awful his contract is.

A Philadelphia Eagles fan pointed out that Golladay is making more than five of the Birds’ offensive stars combined:

Shep tears every ligament in his body up for this team and Kenny Golladay can’t even be bothered to set a block. Send this man to the street. I don’t care how much we have to pay him. GARBAGE.

SNY’s Connor Hughes pointed out that while Corey Davis’ tenure with the Jets has been disappointing so far, his contract is nowhere close to being as bad as Golladay’s:

I keep seeing these Corey Davis & Kenny Golladay tweets. I don't know how you can compare them.

Davis signed a three year, $37.5m deal the Jets can get out of after this season.

Golladay got $72 million over four years!

One NFL fan wondered if Golladay is literally the worst free agent signing in the history of the NFL (a bit hyperbolic, but still…)

All told, Golladay has just two catches for 22 yards this season and seems more likely to be traded than actually making an impact with the Giants this year.

It’s a real shame that Golladay hasn’t worked out in New York, too, as it’s so painfully obvious that Daniel Jones is crying out for a true #1 wide reciever. Not saying he’s equivalent to these players, but just look what happened to Josh Allen (Stefon Diggs), Tua Tagovailoa (Tyreek Hill), and Jalen Hurts (AJ Brown) once they had an elite pass catcher to play with.

RELATED: Peyton, Eli, And Jimmy Johnson Produce All-Time Awkward MNF Moment As They Repeatedly Talk Over Each Other On The ‘Manningcast’