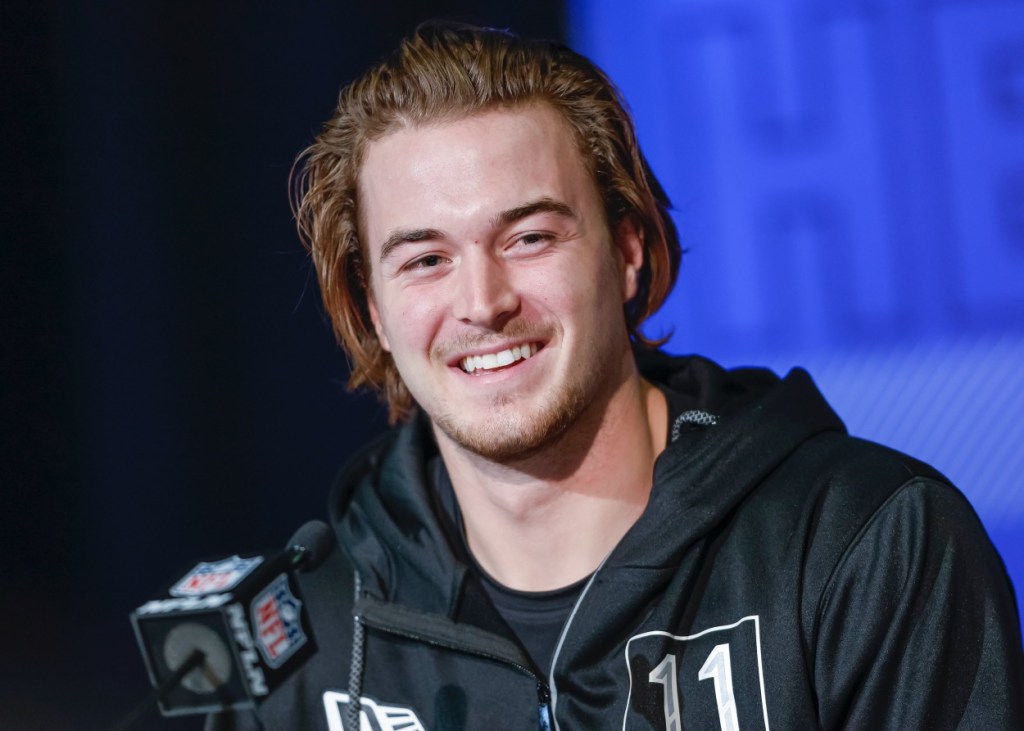 It doesn’t seem unfair to say that Kenny Pickett represents the future of the Pittsburgh Steelers. The team brought in Mitch Trubisky after 2x Super Bowl champ Ben Roethlisberger retired but then drafted Pickett out of Pitt in the First Round of the 2022 NFL Draft. Kenny is now in line to take over as starting QB if anything goes wrong with Trubisky and potentially take over regardless of Mitchell’s success.

It shouldn’t be surprising that Ben Roethlisberger would call Kenny Pickett to offer up his help after Ben spent 18 seasons with the Steelers. He was the face of the franchise for nearly two full decades and he’ll certainly want to help the new guard get adjusted, right?

Well, Ben actually had the last half of a decade to do some mentoring to Kenny Pickett and never even spoke a word to the Steelers’ new rookie quarterback, according to Peter King. But let’s not get ahead of ourselves. Here’s the report of Ben’s offer to help.

Kenny Pickett said Ben Roethlisberger called him and told him if he needs anything or bounce anything off him that he will welcome his call.

"He said he is always there for me if I have any questions or advice. He is an unbelievable player, a Hall of Famer. He is a guy who I will definitely use as a resource these coming weeks."

Again, it shouldn’t be surprising that Ben would offer his help to the rookie quarterback except that Roethlisberger has had PLENTY of time to speak with Pickett, as noted on PFT. They’ve been practicing and playing in the same facilities since 2017. Pitt Football and the Steelers all practice and play in the same place they just have separate locker rooms and enter through different doors.

And Here’s Why Ben Reach Out Now Is Intriguing

Peter King recently spoke with Kenny Pickett and asked him about what it would be like to go through different doors after five years at the football facility in Pittsburgh and it was revealed that Ben had never spoken a single word to Kenny Pickett:

The front doors to the facility are 12 feet apart. To the left, the Steelers. To the right, the Pitt Panthers. And for five years, four playing seasons and one redshirt year, Kenny Pickett walked only through the door on the right.

“Every time I’d walk into the Pitt side, I’d always glance over at the left and kinda envision one day walking over to my left, through the other door,” Pickett told me Saturday, his third day of walking through the left side. “Now that that’s happening, it’s pretty awesome.”

Pickett told me he got to know Mike Tomlin a bit from passing by him to and from the practice field, and walking in and out of the buildings. He never got the chance to talk ball with Ben Roethlisberger—which seems odd to me, to never chat with Roethlisberger in five years—but he did watch Steelers practice a lot.

Kenny Pickett went on to say the Steelers were at the top of his list for where he’d want to be drafted and all signs indicate this will work out well for both parties. But Ben straight-up watched this dude practice from 2017 to 2021 and didn’t speak a single word to him.

If I was working closely with someone and we were doing the exact same job (quarterback, in this case) for five long years and that person never spoke a single word to me I’d be pretty convinced they didn’t want anything to do with me. And if that person then reached out after I got a promotion I’d be skeptical there were ulterior motives at play.

What Are Steelers Fans Saying About Kenny Pickett And Ben Roethlisberger Connecting?

Why is there this narrative that Ben never helped Mason? The entire 2019 season when Ben was hurt he was helping the QBs (which included Mason)

I mean how would you feel if one day your boss was like “hey this guy will eventually be replacing you, will you teach him everything you know?”, but also did you not see Ben mentoring Mason that entire year he was out with the elbow injury, he was on the sidelines helping them

Wow, after 5 years he actually communicated with Kenny. “He never got the chance to talk ball with Ben Roethlisberger—which seems odd to me, to never chat with Roethlisberger in five years—but he did watch Steelers practice a lot.” Peter King FMIA

I completely forgot about this:

Still laughing at the moment during last training camp when Mason threw a touchdown…and no one clapped except for one person.. Ben throws one on the next play and everyone claps. 😂😂

I think it’s probably a lot easier for Ben Roethlisberger to envision himself as a mentor now that he’s retired and no longer worried about his declining performance and getting usurped by a backup. That part should be obvious. But he could’ve at least acknowledged Kenny Pickett in the five years they were practicing and playing in the same building!