NFL Executive Shares All Over The Place Assessment Of Kenny Pickett: No ‘Godd–n Upside’ 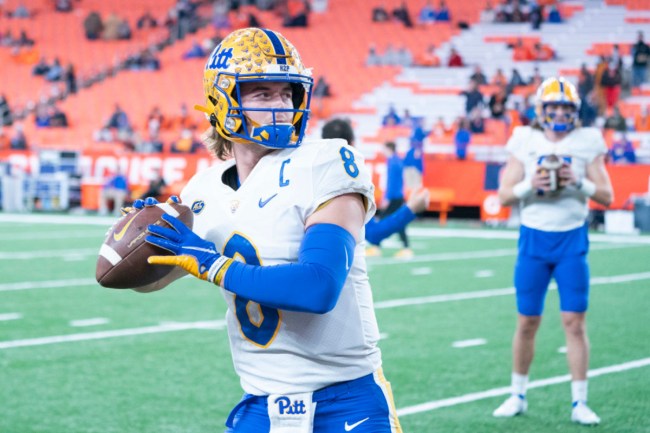 Just like every prospect in the history of the NFL, the assessment of Kenny Pickett’s game and how it’ll translate to the professional level is a mixed bag. Some scouts and NFL executives think he’s the top QB prospect in the 2022 class, while others have given that nod to others.

Over the last few weeks, especially following his impressive pro day, Malik Willis has climbed up draft boards. For most, Willis is viewed as the most talented QB in the ’22 class and the gunslinger with the most upside.

Tom Pelissero of NFL.com recently spoke with scouts, executives, and coaches about the QB class. The majority had nothing but positive things to say about Willis, but the same can’t be said about Pickett.

One executive out of the AFC shared a rather eye-opening assessment of the Pitt product.

“Just his demeanor, coming away from center, how he handled everything, Pickett was the most impressive,” an AFC executive explained. “He was the biggest guy, strongest stature — he just felt like a quarterback.”

“But then your concern is the arm. There’s nothing special about it. What’s he going to look like when he’s getting his ass f—ing blitzed and having to throw off-platform, and he has to win with his arm only? He’s mobile enough. He can move, he’s not lot like a statue.”

“If you had to have a m—–f—– play right now, it’s Pickett, but he doesn’t have any goddamn upside.”

This very well could be the most all over the place assessment anyone has ever given for a player.

According to the exec, Pickett is “the most impressive” and is the guy he’d throw under center given his abilities right now, but his arm is a “concern” and he “doesn’t have any godd–n upside.”

It’s probably a safe bet to say this AFC executive isn’t looking for his team to draft Pickett.