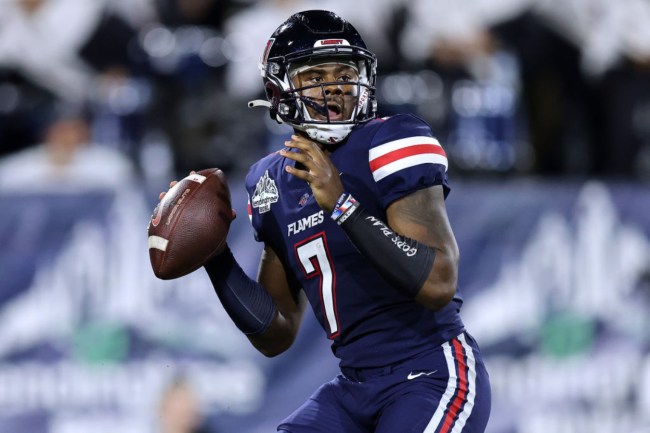 Malik Willis has sky-rocketed up draft boards over the last handful of weeks following his pro day. The Liberty product has unanimously become the top QB prospect in the ’22 Draft class and one NFL coordinator has already given him the nod over two of the top QB prospects in recent NFL Drafts.

Tom Pelissero of NFL.com spoke with anonymous NFL executives, scouts, and coaches and most had incredibly positive things to say about Willis.

One AFC quarterbacks coach went as far as to say that Willis is the only QB in the class “that’s got true NFL traits” before comparing his “once-every-couple-years type of arm” that’s “not quite Josh Allen.”

According to the anonymous coordinator, Willis is the only QB worth using a first-round draft pick on. On top of that bold statement, Willis is a better prospect than both Justin Fields and Trey Lance were.

Lance and Fields were both, of course, first-round picks in the 2021 NFL Draft with Lance going third overall to the San Francisco 49ers and Fields landing with the Bears at No. 11.

Fields had a stellar career at Ohio State and certainly showed flashes a year ago as a rookie in Chicago. Lance, meanwhile, is expected to be handed the keys as QB1 in San Francisco this year.

Nobody knows what Willis’ NFL career will look like until it actually gets underway, but the hype around him is certainly hitting new levels ahead of the 2022 NFL Draft.