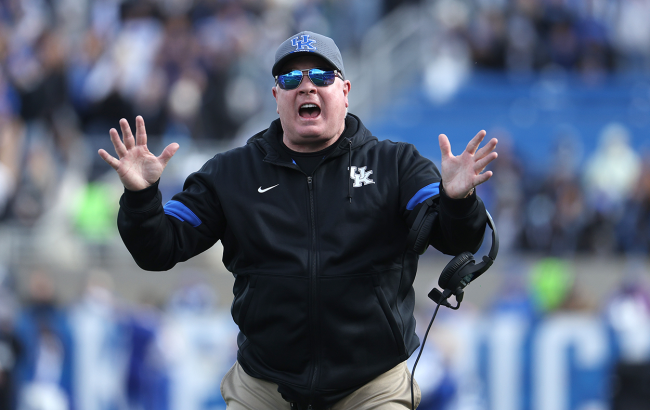 The University of Kentucky has one of the most consistently dominant basketball programs in recent history. Since head coach John Calipari took over the program in 2009, the Wildcats have reached 10 NCAA Tournaments, three Elite Eights, four Final Fours and won a national championship.

In addition, Kentucky has been so dominant on the recruiting trail that this year’s class is the worst in more than a decade and it is still extremely good. There is no denying that basketball is a very, very big deal for Big Blue Nation.

However, head football coach Mark Stoops does not like Kentucky to be called a basketball school. As a result, there is some drama unfolding in Lexington.

During an interview with The Athletic, Calipari made his demands for a new practice facility very clear and went on a wild rant about the smell animal pee while doing so. All of that was fine.

The problem arose when he brought the football team into the conversation.

That comment did not go over well with Stoops, who took over the football program in 2013. Over the course of that time he has gone 59-53 with four bowl wins and two bowl losses.

Recently, the Wildcats have seen more success than ever before. Kentucky football has had two 10-win seasons in the last four years, finished both years inside the Top-20, and is coming off of a big Citrus Bowl win with a lot of hope for 2022.

As a result, Stoops took umbrage with Calipari’s comments and clapped back on Twitter.

Basketball school? I thought we competed in the SEC? #4straightpostseasonwins https://t.co/xUoKmUeonH

While Calipari’s comments were not particularly outlandish, it was foolish of him to turn the aim at his own school. He should never have brought the football program into the conversation and now there is drama inside the same athletic program, which is never good.