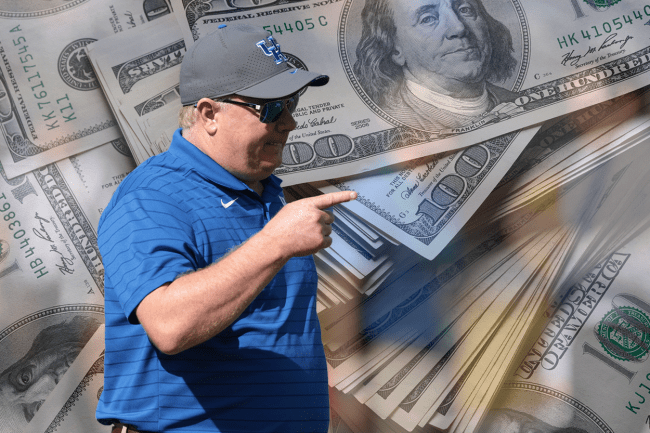 When the NCAA adopted interim rules that allow collegiate athletes to profit off of their names, images and likenesses, it completely changed the landscape of recruiting— especially within college football. Anyone who says otherwise is intentionally choosing to remain ignorant.

After two 10-win seasons in the previous 102 years, the Wildcats have won 10 games twice in the last four seasons under Stoops. He has turned Kentucky into a winner and can recruit high school (and now transfer portal) prospects to Lexington as such.

However, he has run into a bit of a buzzsaw in regard to NIL. The current state of NIL is not the type of coaching that he signed up for.

The ability for recruits to profit while in school is having influence on college decisions. Where as monetary deals were being made under the table in the past, those deals are being made legally over the table.

In turn, teams with wealthier boosters have an undeniable leg up.

Take Texas A&M, for example. Earlier this year, a source with direct knowledge of recruiting in the Texas/Oklahoma/southwest region indicated that Aggie boosters spent a small fortune on this year’s class.

A&M not only landed the No. 1 class in the nation for 2022, but the greatest of all-time. However, Jimbo Fisher claims that NIL money has nothing to do with it.

He says that the top recruits in the country committed to an 8-4 team from a year ago because of how special that Texas A&M is and because he is a great coach building a great program. Fisher sounded extremely defensive in his comments and held himself in very high regard.

“That had nothing to do with this class, this was hard work by our staff,” he said, very angrily and defensively. “It’s insulting that to the kids that come here that you insinuate that.”

Well, Stoops is indirectly implying that Fisher, and other coaches in the SEC and around the country who refuse to acknowledge what NIL is doing to recruiting, are liars.

In a recent interview with On3, Stoops said the following:

“Anybody that tells you that this is not about the money is a liar. It is now about that. The people with money, the people with boosters willing to pay money to sign players — to act like that’s not the case, you’re a flat-out liar.”

Jimbo, as he said himself, is one of those people who acted like that’s not the case and that NIL “had nothing to do with this class.” Thus, he falls into the category of which Stoops indirectly addressed.