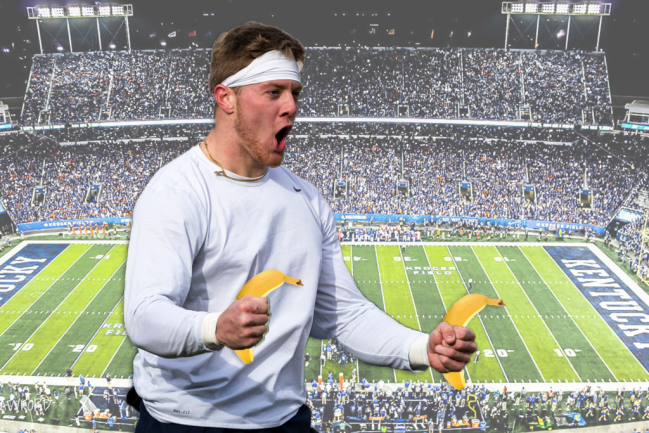 Penn State transfer Will Levis was named the starting quarterback at Kentucky over the weekend, beating out Joey Gatewood and Beau Allen for the QB1 role. The redshirt sophomore has only been with the program since June but has picked up the system quickly.

After Levis was tapped on Saturday, Wildcat fans got to know their new quarterback. That includes going through his social media profiles.

As a result, one of Levis’ old videos is going viral. Back on July 3rd, he posted a TikTok of himself eating a banana like an absolute madman.

For starters, the banana is completely brown and overripe. And then he goes about actually consuming the banana by simply biting into it like, say, an apple.

Levis does not peel the banana or cut the banana. He just gets after it like a psychopath.

I don’t fear the brown spots on bananas. They fear me. #menacetosociety

Levis understands how strange his banana-eating form is and tags the video with “#menacetosociety,” which is absolutely true. While the entire thing is detestable, he might actually be on to something.

Soggy, overripe bananas — and the browned peel — do not look appetizing, but they are great for our health. An overripe banana is rich in antioxidants, which helps prevent and delay cell damage.

Despite being a lunatic, Levis is playing chess while we’re all playing checkers. This isn’t his only strange eating habit.

Per another one of his TikTok videos, he crushes blue powerade and honey nut cheerios after his workouts.

Whether Levis is just playing for viral views or actually adheres to his derange dietary habits, it’s working. The Connecticut-native is balling out in camp and brings high hopes for Kentucky to turn around the SEC’s worst passing offense from a year ago.