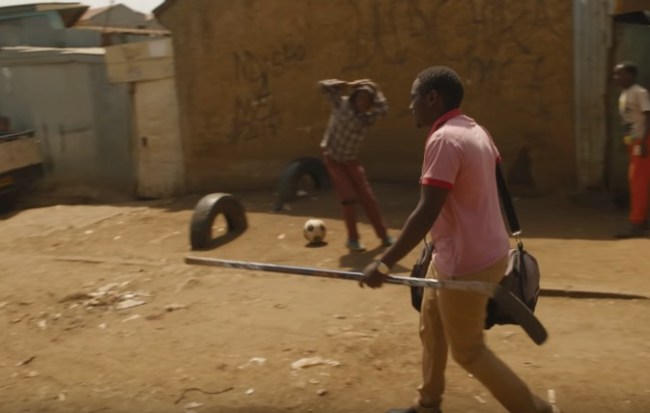 Kenya is a very hot country. In December and January, the temperatures in Nairobi range from the high 70s to mid-50s. August is actually the coolest month due to the rainy/dry seasons, with the average highs ranging from the mid-60s to the mid-70s. Snow? What snow? The equator line runs right through the country.

The Tampa Bay Lightning are the current favorites to win the East this year and by winning the 2003-2004 Stanley Cup they proved that you don’t need snow in order to become great at hockey. I was born and raised in the greater Tampa Bay area and I can only recall one time in my life when it snowed here and it was decades ago on Christmas Eve. The lack of snow in Southwest Florida hasn’t stopped Tampa from becoming a hockey town just like it hasn’t stopped a group of Kenyans from forming the country’s first-ever hockey team.

Tim Hortons, the Canadian-based donut and coffee chain, found out about Kenya’s only hockey team so they flew them to Canada to play their first-ever game which included some special surprises.

This group of Kenyan hockey players proves that hockey appeals to a global audience and you don’t need snow to fall in love with the sport. The team flew to Canada to play their first game in pads. Back in Kenya they’re the only team and don’t have anyone else to play against, just themselves.

Awaiting them in Canada were two ringers who would play alongside them in the game, 31-year-old Sidney Crosby who was born in Cole Harbour, Canada and 2013 #1 overall pick Nate MacKinnon who plays for the Colorado Avalanche. The jubilation on the faces of these players as they meet the best in the world and play alongside them is infectious.

One of the coolest moments of this clip is one one of the Kenyan players reaches out to touch Sidney Crosby’s face as if he was in complete disbelief that Sidney Crosby was really there. Until then, they’d only ever seen these mythical figures on TV. They were larger than life. And in an instant, they were there in the locker room and then on the ice playing together. The entire thing must’ve been so surreal.

Whoever organized this video for Tim Hortons needs a raise. I think we also need a full 30-60 minute version of this short clip. I’d totally watch an All or Nothing season on Amazon focused on this Kenyan hockey team. I just watched the All or Nothing season about Manchester City in the Premier League and it was incredible. Someone needs to make this happen.