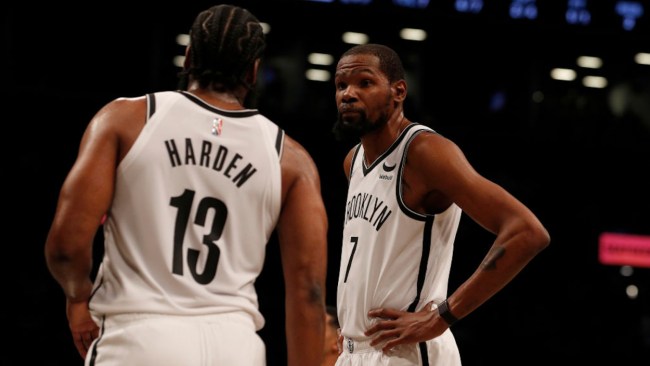 We’re all well aware that things didn’t end well between Kevin Durant and James Harden given how Harden forced his way out of Brooklyn, and by the sound of it, things didn’t exactly get off to the best of starts either.

The Nets had formed a legitimate superteam after acquiring Harden from the Houston Rockets, at least that’s how things looked on paper. It didn’t take long for some serious disconnection and distractions between Harden and Durant, however.

According to ESPN’s Kevin Arnovitz, things got off on the wrong foot as soon as Harden arrived at camp out of shape prior to the start of the season.

Durant wasn’t just caught off guard by how out of shape Harden was, he was “astonished,” according to Arnovitz.

“Durant was astonished in the opening weeks of the season at Harden’s lack of explosiveness and sluggish play, something he attributed in large part to Harden’s being out of shape, as he did the ensuing hamstring issues,” Arnovitz wrote.

Harden of course didn’t like Durant’s reaction. A source told Arnovitz that Harden found KD’s reaction”grating and self-righteous” and the two never resolved the conflict.

Harden ultimately forced himself out of Brooklyn just one year after joining the Nets. He averaged 22.2 points over 44 games for the Nets before the team dealt him to the Philadelphia 76ers.

Based on this new report, it sounds like things were inevitably going to come to a disastrous finish between Durant, Harden, and the Nets eventually.