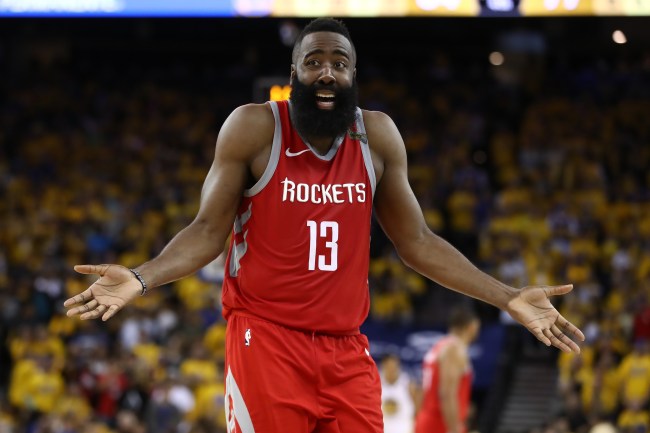 As a 30 year old man whose dreams of athletic prowess have dissolved into a pint of craft beer, I am fully aware of just how detrimental to the body an undisciplined workout regime and a shitty diet can be. When I blew out the candles on my 30th birthday, I blew out the last flickering light of a functioning metabolism. And that cake? It’s still clinging to my ribcage like Rose from the Titanic clinging to a wooden door in the Atlantic while Leo freezes to death feet away.

Point being, I am in no position to judge anyone for their body’s aesthetic attributes. That would be like the KKK judging me for wearing white after Labor Day.

With that said, holy shit look at NBA MVP James Harden looking like that guy at the YMCA who plays ball in low-tops, brings his own gallon water jug, and smells like Newports.

This should be inspiration to anyone out there who eats pizza rolls for breakfast. Anyone who brushes their teeth and washes it down with Surge. Anyone who wears a t-shirt in the pool. You too can secure a $228 contract extension in the NBA and win MVP. Hell, you can even date a Kardashian if that’s your thing. All this without even playing a lick of defense or wearing two socks.

Not a bad deal.

James Harden is really out here living great this summer after winning an MVP pic.twitter.com/PERRSzTHoM