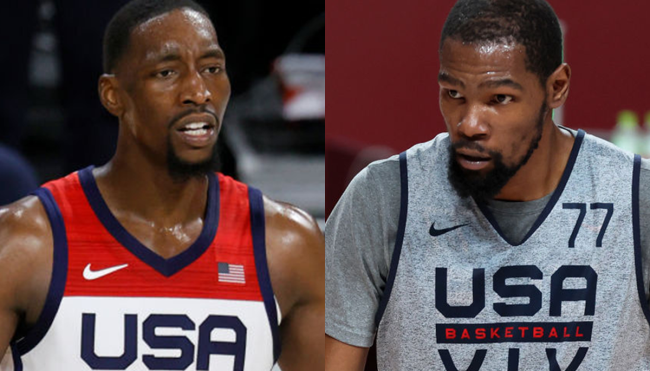 Earlier this month, Twitter was torn apart by a fiery debate concerning basketball etiquette after a viral video raised the question of whether or not it’s common courtesy to give someone a complementary layup after they brick a shot during a practice or warmup.

While that particular phenomenon seems to be fairly regional, anyone with a modicum of basketball knowledge knows that grabbing the rock for yourself after someone makes a shot is one of the gravest sins you can commit on the court.

As a result, I can understand why Kevin Durant was less than pleased with what unfolded when Team USA was recently gearing up for their debut at the Summer Olympics in Tokyo. Video captured KD drilling a basket from behind the arc during a shootaround, and after wandering around like a lost puppy when the ball didn’t make his way back to him, he accused Bam Adebayo of taking what was rightfully his.

Not @Bam1of1 breaking basketball law. @KDTrey5 wasn’t having it 😆

After the clip started to make the rounds, Durant hopped on Twitter to publicly shame his teammate over the faux pas.

Dog seen me knock down the corner three and proceeds to work on his ball handling with the ball I green bean’d wit. Bro gotta learn some respect @Bam1of1 https://t.co/OX4YeJLa5k

However, there was one slight problem: if you take a closer look at the video, it’s evident that Adebayo had actually grabbed the ball that made its way through the net courtesy of Damian Lillard, who ended up replacing it with the one Durant had been using—a fact Adebayo pointed out with a tweet of his own.

Now, it’s worth noting Adebayo was still objectively in the wrong here, but the only person who has the right to be pissed at him is Lillard. Regardless, it’s pretty obvious Durant is just being the troll he always has been, but I’m sure that won’t stop plenty of people from issuing Hot Takes blaming him for screwing up Team USA’s chemistry if the squad doesn’t take home the gold.