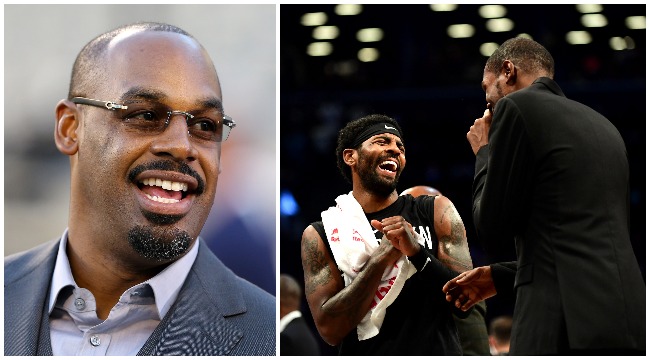 The most respectable thing about Kevin Durant is that he gives all his haters his equal, undivided attention. Doesn’t matter if you have a blue check mark and a billion followers or a blue race car bed and follow your crush home from school, KD is going to battle you with the fire of 1,000 burner accounts.

His most recent battle: Donovan McNabb.

McNabb hopped on Twitter to address the recent reports of Kyrie having ‘mood swings’ and displaying bizarre behavior that has Nets officials ‘scratching their heads.’ The six-time Pro Bowler decided to play ‘told ya so’ to KD, who should have known that the guy who nearly single-handedly derailed the Celtics season last year would be a pain in the ass for team chemistry.

With everything starting to come out with @KyrieIrving and the @BrooklynNets , when will @KDTrey5 realize maybe I should’ve stayed in Golden State? Boy I’ve seen this happen before 🤔🤔🤔👀👀

Durant told ESPN that the key to success with Kyrie is avoiding him. Seems legit.

“I look at Kyrie as somebody who is an artist. You have to leave him alone. You know what he’ll bring to the table every night because he cares so much about the game.”

Durant took a more succinct, yet powerful approach to his sparring with McNabb.

McNabb responded with arguably the most overused GIF in human history.

I’m happy to announce the winner of this Twitter spat is Not The Guy Who Puked During The Super Bowl.