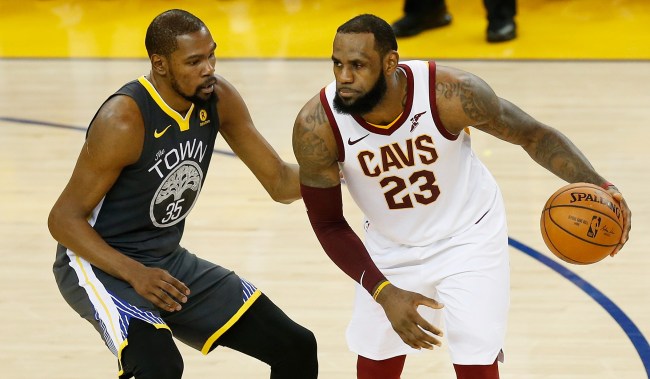 Kevin Durant has had tremendous success since joining the Golden State Warriors in the summer of 2016 as a free agent, winning back-to-back NBA titles and creating a juggernaut that the league has never seen before. But could Durant have had even more success alongside LeBron James on the Cleveland Cavs instead? That’s something that, according to the Cavs’ former general manager, David Griffin, was at least discussed.

Talking to ESPN‘s Zach Lowe, Griffin dropped some insider knowledge about Kevin Durant’s 2016 free-agency, saying that the Cavs discussed trying to lure the one-time league MVP to pair up with James; which is something that we’ve seen in a deadly combination in the All-Star Game the past couple seasons. Here’s what Griffin had to say.

“I don’t believe you can dream big enough in the NBA,” Griffin told Lowe. “You have to go through the exercise.”

Unfortunately, Griffin didn’t get into too many specifics about how deep those conversations got, but it would have been lethal pairing Kevin Durant and LeBron James together. Ultimately, Durant signed with the Warriors and, ironically enough, helped take down the Cavs in the past two NBA Finals. Oh, what could have been though.

From Durant’s perspective, we don’t know how seriously close he was to ever considering the Cleveland Cavs as an option during his 2016 free-agency. However, he did provide a little insight to Connor Letourneau of SFGate.com in 2016 after the Warriors blew that 3-1 NBA Finals lead to the Cavs, suggesting that Golden State became more real after that.

“As they lost, it became more and more real every day. You start to think about it even more. To see if I would fit. Then once I sat down with these guys, everything that I wanted to know about them they kinda showed me. But we don’t have to talk about it because they didn’t get the job done and they came after me and who knows what would’ve happened? I guess you could say I’m glad that they lost.”

For Cleveland Cavs fans, it’s hard not to play the “what if…?” card here. Had the team been able to lure Kevin Durant to them three years ago to play with LeBron James, Kyrie Irving and Kevin Love, would they have become the dominant franchise in the NBA? Most likely — even if Irving or Love would have had to be traded to make salaries work. It probably would have kept Irving happy, James in Cleveland and, well, the rest would have presumably been lots and lots of winning.