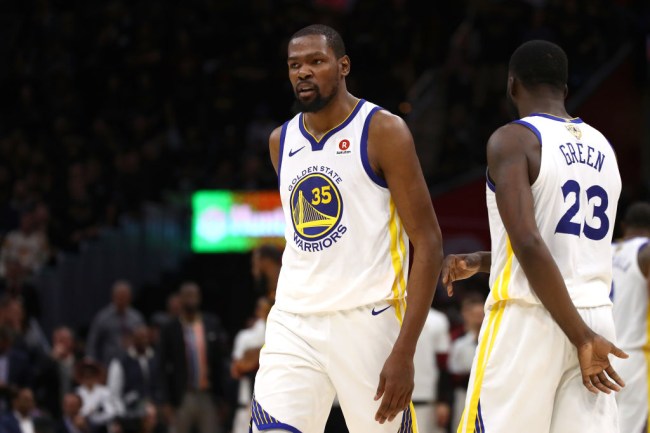 Last night Kevin Durant’s heroics paved the way for another Golden State Warriors win against the Cavs and helped his team grab a 3-0 series lead in the NBA finals.

Durant scored 43 points and shot 15-of-23 from the field and 6-of-9 from 3-point range which included this dagger shot late in the game to put away the Cavs once and for good.

Despite having the game of his life last night KD wasn’t going to put up with any bullshit from annoying Cavs fans. While making his way inside his hotel room last night KD had to be held back from physically confronting a heckling fan for saying the University of Texas is “butt”.

D — fresh from hitting that dagger that gave Golden State a 3-0 series lead over Cleveland — was returning to the Ritz-Carlton … where Cavs fans were heckling him on the way in.

They shouted stuff like “you suck” and “where LeBron at?” — but the one that got him to turn around … “KD, UT’s butt!”

Obviously, Durant went to the University of Texas … and he stopped in his tracks to stare the heckler down.

In fact, a team official started to hold KD back.

KD is the most sensitive athlete of all-time and it’s not even close.