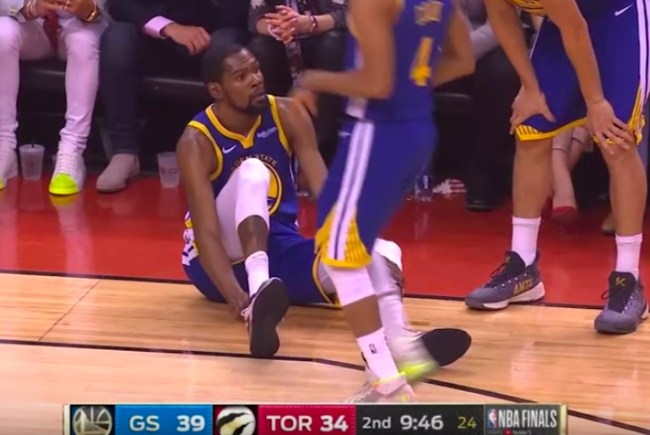 Kudos to Kevin Durant for giving it a go today in Game 5 of the NBA Finals, where it’s a do-or-die situation for his Golden State Warriors against the Toronto Raptors. After missing more than a month with a right calf injury, the superstar was able to lace ’em up and give the Dubs a much needed boost, scoring 11 points during his time on the floor in the first half.

Unfortunately, for anyone watching Game 5, you saw Kevin Durant go down about midway through the second quarter with an injury to, yep, his lower right leg. After planting while making a spin move, KD lost the ball and immediately fell to the floor, holding that right leg as several dumbass Raptors fans cheered. Here’s a look at the injury in real time.

While there’s no report on the extent of Kevin Durant’s injury, this slow motion video of the play shows a pretty distinct pop, with the two-time NBA Finals MVP’s leg ripple. Take a look at the video below.

As for the updates, Kevin Durant isn’t returning to Game 5 of the NBA Finals, per the ABC telecast from Doris Burke — which was literally reported as this was being written — with an MRI coming tomorrow. Prior to Burke’s report, it was said on the telecast that he was in the Warriors’ locker room with his agent prior to halftime, with Durant clearly being upset, and the mood being somber. Also, according to ESPN’s Ramona Shelburne, Durant left the locker room in a walking boot and on crutches.

Durant just left on crutches with a walking boot.

This is a major blow for the Warriors in this NBA Finals, but, hopefully, it isn’t something serious that could cost Kevin Durant lots of money during free agency this summer, as he’s set to hit the open market and become one of the most attractive superstars available. So, while the short-term isn’t great, the long-term is what’s most important for Durant to think about right now.