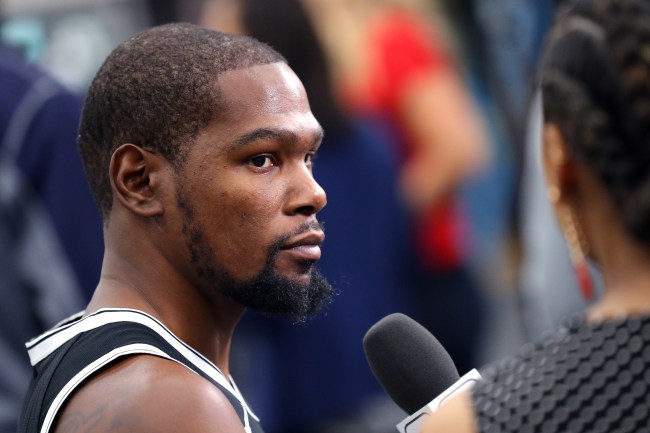 So Kevin Durant took a big dump all over the perpetually disappointing Knicks and their fanbase today when in a chat with ESPN’s Michael Kay, he called the Knicks uncool and an unappealing destination for free agents.

Durant said the younger players don’t harbor the same mystique for the Knicks because they have no memory of them ever being good.

Droves of Knicks fans who still think their team deserves a shred of respect for being one of the worst run organizations in sports in sports’ biggest market to say hateful things to Durant on Twitter.

Luckily for us, Durant responds to everything. Here are a few of today’s most notable battles.

Durant’s first battle of the day is against I AM RENA1SSANCE (TM). While not much is known about this competitor, he is a ‘Mirror Bathroom Selfie’ profile picture type guy, so you know he’s cool as fuck.

I AM RENA1SSANCE (TM) showed his trolling inexperience here, getting too emotional in the early goings without bringing any burns of value. Common mistake from amateurs. Sprinting in a marathon.

Boogie is fighting for his son, who his Twitter profile claims is his #1 priority, in front #2 Knickstape and #3 Everything else. As a Knicks fan, Boogie must have a lot of pent up orange and blue balls from KD choosing the NBA team down the street with literally zero fanbase.

Let’s see what he’s got.

I love that I got knicks and nets Twitter in a frenzy, make sure y’all come to the games and bring it full circle. I don’t wanna hear no bullshit

Ooo an incorporation of multiple emojis. A visual burn. Just lacking in creativity.

Chino Lansky, a Queens native and Knicks fan, whose name alone sounds like he sells coke to high schoolers.

Tell me in person. We got the Knicks early in the season

Succinct. Smart. Savage. KD smacks back with the tried-and-true “say it to my face” pseudo-threat.

I know it’s a Knicks town, we got our own lil section though. We can both occupy this wonderful city! It’s all love on this side

KD completely bitched out here. Disgusting. “Oh sorry sir, I know this is your team’s city, the team that’s been pathetic for 20 years, but as long as we can both work together…” FUCK OFFFF.

Knicks fan who believes Frank Ntilikina will win 2020 DPOY, per his profile. Imagine that being your one defining hope. Yikes.

Are we even fighting anymore, KD? HAVE A SPINE!

Girlfriend or not I’ll still be in your head

What are u gonna do? Boo and tweet me insults? Have at it champ

Thomas may want to slow down with the tough talk or James Dolan will kick him out of the building.

Winner: Does It Even Matter KD I Guess You Won Why Are You Engaging Go Out And Have Some Famous Person Sex Allow Us Mouth Breathers To Fight On Twitter To Give Our Small Lives Meaning!!!!