Kevin Durant And Kyrie Irving To The Brooklyn Nets Is ‘Pretty Much Done’ According To ESPN’s Stephen A. Smith 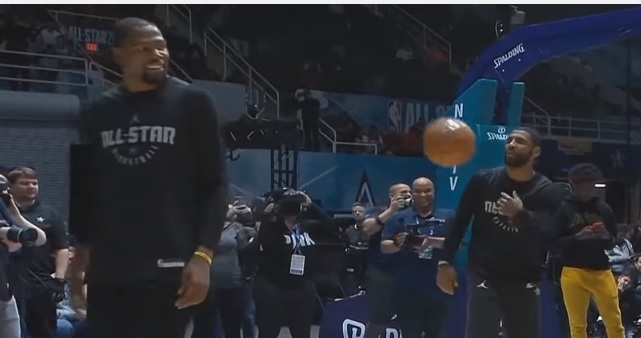 For the past few weeks we’ve been hearing the rumblings over Kyrie Irving and Kevin Durant meeting each other to discuss the possible of playing on the same team.

According Bleacher Report’s Ric Bucher Kyrie is putting pressure on KD to join him in Brooklyn.

Durant and Irving, league sources say, have met twice in recent weeks to discuss their desire to continue their careers on the same team, an idea forged while playing together on the U.S. national team. The first meeting took place in the Bay Area while Durant nursed a strained right calf; the second occurred in New York shortly after Durant had surgery to repair a ruptured Achilles tendon suffered in Game 5 of the NBA Finals.

This afternoon, ESPN’s Stephen A. Smith, who calls himself a Knicks superfan, took to Twitter to deliver a somber message to Knicks fans by reporting that Kevin Durant and Kyrie Irving to the Nets was “pretty much done”.

I said this over thousands of time if KD come to NY the Brooklyn Nets is the better fit. Healthy franchise, stable office, and talent. The Knicks have talent, a building office, but then there's one problem……..

Kyrie Irving and Kevin Durant to Brooklyn is a done deal, per @stephenasmith

Stephen A, although hella entertaining, has no validity to any statements he makes lmao

Damn it's a wrap, it's not happening now…

While others have accepted the writing on the wall.

KD and Kyrie on the way Stephen A!! pic.twitter.com/Jx9jYQeiGk

As of right now the Brooklyn Nets are favorites to land KD but we won’t know until Sunday where he decides to go.