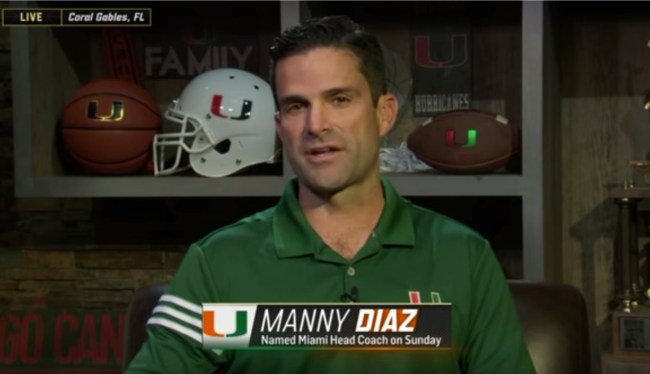 Kevin Durant is a one-time NBA MVP, has won back-to-back championships with the Golden State Warriors and has, generally speaking, changed the entire landscape of sports as we know it. Sure, LeBron James leaving the Cleveland Cavs to take his talents to South Beach back in 2010 to form a superteam was shocking, but when Kevin Durant left the Oklahoma City Thunder to go to the Warriors — who had just won a regular season record 73 games — it was an example of the rich getting so much richer. The fact that Durant made his move after his Thunder team blew a 3-1 series lead in the Western Conference Finals was even more of a BS move, but that’s a story for another day.

Anyway, speaking of Durant following that whole, “if you can’t beat ’em, join ’em” mentality, his decision proves that everyone wants to win, even if you’re one of the best players on the planet. That’s nothing new, but, apparently, new Miami Hurricanes head football coach Manny Diaz thinks that Kevin Durant joining the Warriors to, you know, win, is the reason his program hasn’t had success in recruiting top talent.

Seriously, according to the Miami Herald, here’s how Manny Diaz made Kevin Durant the scapegoat for The U’s trouble in recruiting the past few years.

“OK, so the only way you can battle that is you have to put out a product that makes a kid say, ‘I’ve got to go do that,’ and they’ve thought that for a long time. Remember, what’s occurred now the last couple years is really new in their memory at Miami, but we have to continue to pound on it where the ninth-graders and the eighth-graders are like, ‘Look at the Miami Hurricanes. I want to be that guy.’

“And then [they say], ‘My friends are there, and I know that guy, and I knew that guy because he kicked my butt when I was in 10th grade and he was a senior. I want to go play where he plays.’ So, I think setting the tone like that will be the key to the recruiting.”

It’s nice to see that Manny Diaz is just realizing that winning attracts the best recruits, guys. If that was his sales pitch in his interview with the Hurricanes, then, watch out, because we might have the next Sean McVay down in Coral Gables, everyone! Yes, I’m being an ass.

While Miami’s football program still has some higher-ranked recruits considering them as an option for next season, Diaz needs to try and work with what he’s got right now, develop those players and try to return the Hurricanes back to glory. That’s easier said than done, of course, given the school had recruiting problems well before Kevin Durant joining the Warriors — The U went nine-straight seasons without a bowl win from 2007-2015 — but one of the biggest superstars in the NBA is to blame, obviously.

I don’t know what’s more delusional: Manny Diaz blaming Kevin Durant for the recruiting trouble of the Canes or the fact that Knicks fans think they have a shot at landing Durant in free agency this summer?