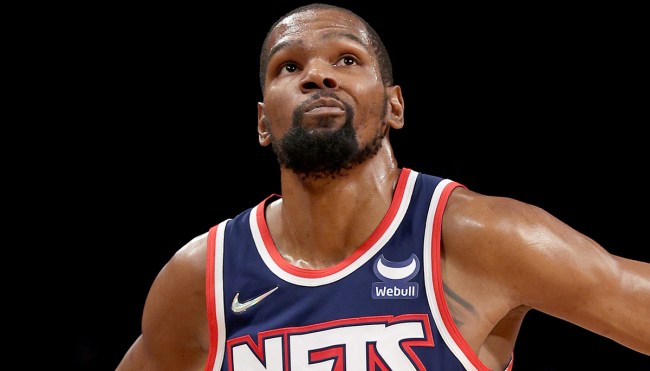 Based on the flood of reports that surfaced toward the end of June, it seemed very likely Kyrie Irving’s time with the Brooklyn Nets had come to an end following his third campaign with the team following an underwhelming season filled with drama and disappointment.

However, things took an interesting (and, in retrospect, fairly predictable turn) earlier this week when he made the sage decision to pick up the contract option that will lead to him getting paid more than $36 million next year as opposed to taking the pay cut that would’ve likely accompanied a move to another team.

That news broke shortly after a report surfaced that suggested Irving had asked the Nets to trade him. That may not have ultimately come to fruition, but on Thursday, we were treated to a pretty wild twist after Shams Charania reported Kevin Durant has now asked for a trade out of Brooklyn.

Adrian Wojnarowski may have missed out on the scope, but he said insiders have told him Durant’s request seemed inevitable after Iriving announced his plan to return.

Kevin Durant and Kyrie Irving had no contact with the franchise after Irving opted into his deal on Monday, and a sense of inevitability existed that Durant would eventually ask for a trade, sources tell ESPN. It happened today.

That development is one of the crazier “THIS LEAGUE!” Moments we’ve been treated to over the course of an already busy offseason, and it didn’t take long for fans and players to chime in after the new brokes.

Kevin Durant waiting for Kyrie to opt in only so he can request a trade later pic.twitter.com/FOML01fm74

Kyrie: we are running it back now that I’ve opted in!
Kevin Durant: pic.twitter.com/6q9lii8jkq

Funniest places the Nets can trade Kevin Durant to, ranked:

Kyrie after opting in: Let’s go win this chip now!

Kevin man we have some great news, remember how you begged that we get royce O’Neale

Get the popcorn ready now, because you’re probably going to need a ton of it as things continue to unfold in the coming days and weeks.