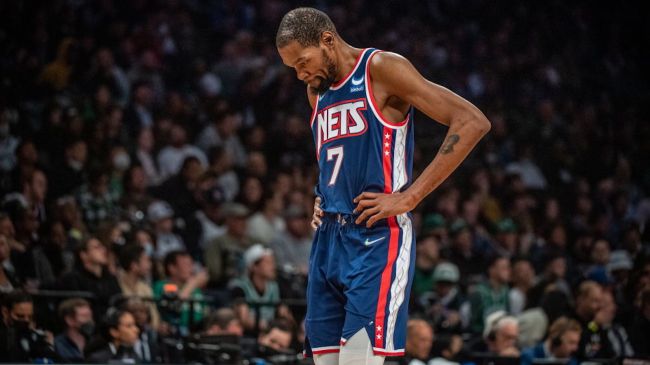 Despite his best efforts — Kevin Durant balled out for the Nets all year (when healthy) and dropped 39 points in Monday’s elimination game against Boston — Brooklyn’s tumultuous 2021-22 season came to an end this week at the hands of the #2 seed Celtics.

Now that he’s no longer competing in the postseason, Durant has time for his second favorite activity behind basketball: social media.

The 33-year-old future Hall of Famer wasted no time clapping back at his haters in recent days as he even took aim at Charles Barkley in response to Chuck’s comments about KD being a “bus rider” on the Golden State Warriors’ title-winning teams. Inside the NBA then spent Tuesday night predictably and elaborately clowning on KD.

As we’ve learned after a decade-plus of watching KD’s Twitter antics, he wasn’t only chirping at NBA analysts, as he also replied to a random NBA fan who told him to delete his Twitter.

“@KDTrey35 you already did what n—— dreamed about doing. This summer delete Twitter,get in the weight room, lock in, and show them what the kid from Seat Pleasant really is about. Make them eat those words.,” Twitter user @swav_ay tweeted at Durant.

Durant then replied with a predictably blunt retort: “F— that.”

I’m not bouta delete my twitter fam, fuck that lol

Despite the turmoil of this season, the Brooklyn Nets will largely run it back next season with a similar roster given their lack of draft capital and bloated contracts. With Kyrie Irving in the fold for the full year, though, perhaps the Nets’ fortunes will be better off. Nets fans certainly shouldn’t hold their breath when it comes to Ben Simmons, though.

RELATED: Charles Barkley Rips ‘Bus Rider’ Kevin Durant, Implies That His Titles Are Fugazi Because He Wasn’t The ‘Bus Driver’