Kevin Durant Refers To Himself As ‘The God’ While Trash Talking Charles Barkley, ‘Inside The NBA’ 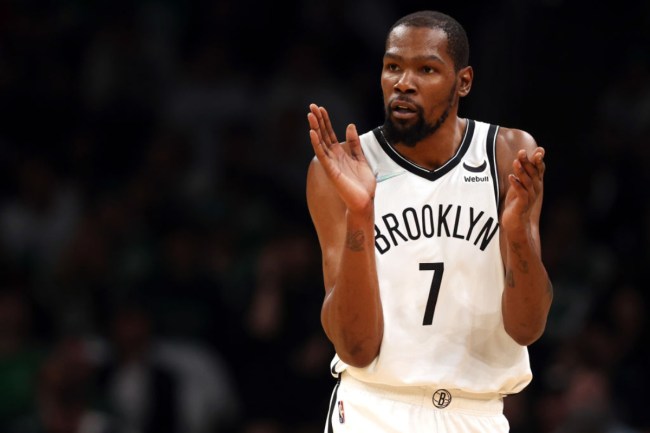 As soon as the Brooklyn Nets fell into a 0-3 hole against the Boston Celtics they immediately became the punching bag of the NBA. Kyrie Irving, Kevin Durant, head coach Steve Nash, and anyone else involved with the Nets wasn’t safe from catching a shot from someone with a voice in the basketball world.

Charles Barkley owns one of the loudest voices in the NBA and took direct aim at KD after the Nets dropped Game 3.

Chuck took shots at Durant by questioning the validity of his NBA titles because he considered KD to be a “bus rider” on those teams and not the “bus driver.” In other words, Barkley didn’t see KD as a leader, or the best player on the team, during his time with the Golden State Warriors.

Durant didn’t feed into Barkley at first, but after Brooklyn was eliminated from the playoffs on Monday night, KD couldn’t help himself the following morning.

He jumped on Instagram and posted pictures of Barkley during his time with the 76ers in which he got to play alongside Julius Erving and Moses Malone early in his career. Durant asked the question “where would Chuck be without the big homies” on his Instagram story.

Then, Rob Perez, better known as WorldWideWob on Twitter, fired off a couple of tweets about how Barkley and ‘Inside The NBA’ are going to “destroy” Durant after his Instagram stories.

Well, Durant saw the tweet and referred to himself as “the god” while essentially telling the ‘Inside The NBA’ crew to bring it on.

An army of producers against the god. Just Another Tuesday https://t.co/yxHlYT8Efl

This isn’t the first time Durant has called himself “the god” on Twitter. In fact, he referred to himself as such less than a month ago.

After the Nets fell to the Bucks, FOX Sports’ Nick Wright shared a tweet explaining that he felt bad for KD noting the bad luck he has.

Durant followed that up with a bit of a condescending tweet for “little Nicky.”

Don’t feel bad for the god. Life has been incredible little Nicky 😁 https://t.co/fZ0jrPHXHm