Kevin Durant Rips Grown-Ass Man Who Heckled Him And Cost Him $25,000 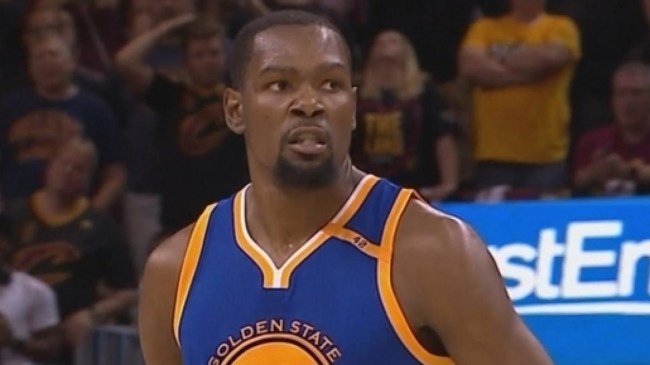 Is it just me, or has Kevin Durant got all sorts of salty lately? Look, I get it, the dude is one of the best ballers on the planet, playing alongside other all-time greats, on the greatest team in the NBA and has lots on his mind as he ponders his future. Still, Durant just seems like he’s got this “you’re with me or against me” kind of attitude that didn’t exist early on in his career. It’s almost, dare I say it, Kobe-esque.

We all know about the little argument he and teammate Draymond Green got into a couple weeks ago, which has sort of sent the Dubs spiraling into a mini funk. But Kevin Durant also got fined a cool $25,000 by the league for telling some heckling Dallas Mavericks fan to “shut the f*ck up and watch the f*ckin’ game.” See, told you Durant seemed salty lately.

Well, before the league officially announced the $25,000 fine for Kevin Durant, the All-Star was on Chris Haynes’ podcast, getting word of the harsh penalty live on the show. It provided a pretty solid reaction from the two-time NBA champ, too, with him giving his thoughts on the whole thing. Take a look.

For those interested, Kevin Durant’s reaction as I break the news of his $25,000 fine right in front of him. Also, his thoughts. pic.twitter.com/1rWgkZV3Kb

You know, as much as I think Kevin Durant’s a bit of a sellout for joining the Warriors to get some rings, I love this reaction about the Mavericks fan. It’s one thing for a bunch of teenagers to heckle him and talk crap, it’s a whole different level when it’s a grown-ass man doing it. I mean, I can’t just go up and start heckling some other 30-year-old guy at the bar and not expect to get called out — or my ass kicked, right?

Durant plays the whole thing pretty cool, which is kind of his M.O. these days, even if it kind of unauthentic. C’mon, KD, we all just liked you more when you were the unassuming, ah shucks star who showed up to press conferences with a backpack on. Where’d that dude go? This whole hard ass Kevin Durant just seems… weird — and it’s why people like Stephen A. Smith will call the guy out for trying to act tough when he’s really not.