Kevin Durant, Stephen A. Smith, Shannon Sharpe, And Skip Bayless Are Beefing On Twitter After KD Said The Trio ‘Changed Basketball For The Worse’ 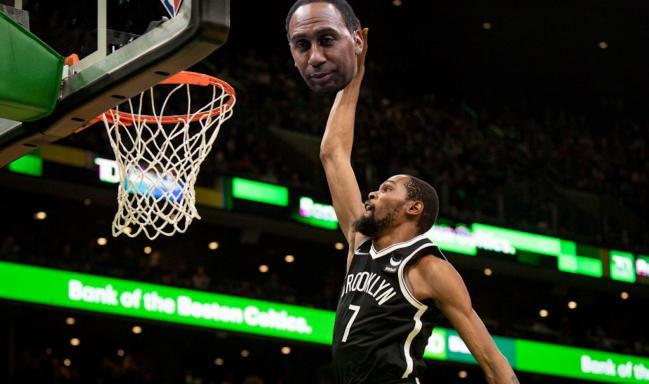 Kevin Durant has taken shots at the talking heads of ESPN and Fox Sports 1 once again, this time hoping on Twitter — as he so often does — to lump the likes of Stephen A. Smith, Skip Bayless, and Shannon Sharpe into a group that he thinks has “changed the game for the worse.”

Durant’s comment came in response to a conversation on Wednesday’s episode of First Take that saw Stephen A., Chris ‘Mad Dog’ Russo, and Amare Stoudemire debate whether or not Stephen Curry and Michael Jordan have changed the game of basketball in a positive way.

Durant, who played with Curry and likely idolized MJ growing up, chimed in to not only roast the trio of pundits but also reason that both players have made the game of basketball better (which is objectively true).

My theory is that guys like steve, skip and Shannon have changed the game for the worse. Playas like Stephen and Michael can only push the game forward. https://t.co/0Oc9J2HqxS

Smith, of course, was quick to fire back at KD, saying that media personalities like him aren’t going anywhere anytime soon:

…..news for you @KDTrey5. We ain’t going any damn place. For every @stephenasmith, Skip, @ShannonSharpe and others, there’s thousands more coming down the pike. We’re not going away. We multiply. Sorry!!!! https://t.co/YvPHNVMOE6

Shannon Sharpe also let his voice be heard (at the time of this writing, the always vocal Skip Bayless, Sharpe’s co-host on Undisputed, has yet to chirp back, but rest assured, he certainly will in some way, shape, or form):

I took a nap after wrk like I always do. I wake up and I’m trending. I read it’s about something @KDTrey5 said regarding me and @stephenasmith. What did I say or do? I’m confused. What did @stephenasmith say and why am I catching strays because of it? 🤔🤔

KD, of course, wasn’t prepared to let SAS get the last word, choosing to instead reply back with a meme *of* Stephen A. Smith:

Truthfully, I haven’t even watched the video in which Smith argues that the literal GOAT of all GOATS made the game worse, as Jordan’s impact on the sport reaches far beyond the court. Jordan is as synonymous with NBA basketball as McDonald’s is with french fries — as the clouds are with the sky.

To suggest a man — the first athlete to ever become a billionaire, by the fat — whose fame arguably eclipsed the game in and of itself was anything other than the most important figure in the history of the sport is simply delusional.

RELATED: Stephen A. And ‘Mad Dog’ Russo Jump And Scream Like Toddlers While Arguing About A Totally Made-Up Topic