Stephen A. And ‘Mad Dog’ Russo Jump And Scream Like Toddlers While Arguing About A Totally Made-Up Topic 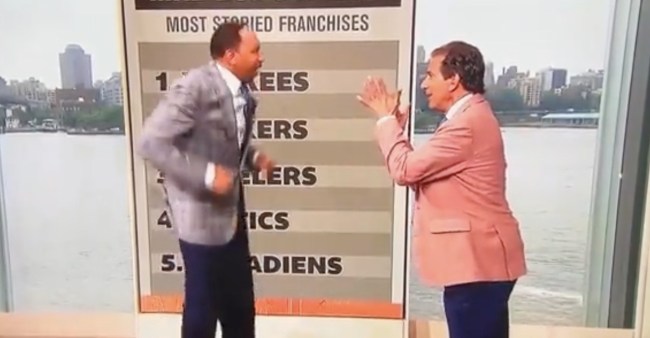 Despite the fact that I’m actually quite a fan of both Stephen A. Smith and Chris ‘Mad Dog’ Russo’s antics, there’s simply no denying that at the end of the day, it’s performative nonsense. And that’s fine because at the end of the day, that’s what entertainment is. It’s no more performative or nonsensical that, let’s say, Star Wars: granted, they’re wildly different means, but they ultimately accomplish the same end: entertainment. This video from Wednesday morning was the latest example of that.

Given that the NBA Finals and Stanley Cup playoffs have yet to start — and the fact that the baseball season is currently in its early stages and the NFL is arguably in the midst of its quietest time of the year — Stephen A. and Mad Dog were left to their own devices on the June 1 show, which led to them debating the totally fugazi topic of “most storied franchises”, which is a totally subjective debate.

Nevertheless, because it’s simply *what they do*, SAS and MDR screamed and shouted about it anyway, with the pair even stomping their feet like infuriated toddlers.

All hell breaks loose when Stephen A and Mad Dog argue about Celtics vs. Lakers. Stay for the end when Dog looks like he’s about to trip over himself. pic.twitter.com/hNcxWhxsUy

With Stephen A. now working on NBA Countdown for ESPN, he’ll also be on the sideline for the pre-and-post-game show for this year’s NBA Finals between the Golden State Warriors (appearing in the sixth finals in eight years) and the Boston Celtics, who have made it to the NBA’s showcase series for the first time in the Jayson Tatum and Jaylen Brown era.

The NBA Finals will kick off in California on Thursday night at 9 p.m. EST when the Celtics travel to the Bay Area to take on Steph Curry, Klay Thompson, Draymond Green, and the rest of the Warriors.