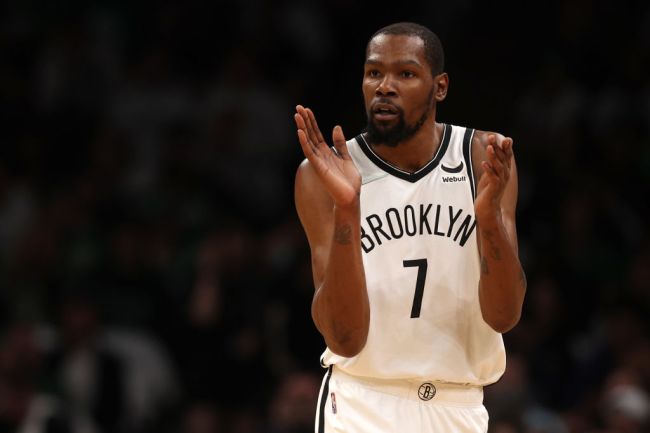 It may be time for the Brooklyn Nets to reconsider their asking price for Kevin Durant.

In the week since Durant requested a trade, there have been plenty of rumors about what the Nets are looking to get back in that trade. There were reports that if he went to the Suns, they wanted Devin Booker.

There have been reports they wanted the biggest haul in NBA history. Then it was reported that they wanted that haul to include a young star they could build around.

The latest report reveals that they may want more than anybody in the league would ever consider giving up for Durant. According to NBA insider Chris Haynes, the Nets engaged in talks with the Minnesota Timberwolves about a Kevin Durant trade and made an absolutely ridiculous offer to the T-Wolves.

According to @ChrisBHaynes, in discussions centered around Kevin Durant, the Nets asked Minnesota for Karl-Anthony Towns, Anthony Edwards, and FOUR 1st round picks.

Wouldn't be surprised if the Clippers called to ask for the price and they asked for Leonard and George. pic.twitter.com/kRd3uO0DpX

Kevin Durant is a great player. There’s no doubt about that, but even asking for just KAT and Anthony Edwards makes the Nets seem like that guy in your fantasy league that nobody wants to trade with. To throw 4 picks into the discussion too is flat out disrespectful.

Karl-Anthony Towns is only 26 years old and recently signed a massive contract extension. Anthony Edwards is only 20 years old and averaged over 20 points per game in just his second NBA season.

Kevin Durant will be 34 before the start of next season.

KAT and Edwards offers any team they join a ton upside for the future and the ability to compete right now. Durant’s window to win is quickly closing.

There is just no way to make this deal make sense for the Minnesota Timberwolves even before including draft picks.

The Nets are going to have a really tough time trading Kevin Durant if these are the kinds of offers they’re going to be sending out this offseason.