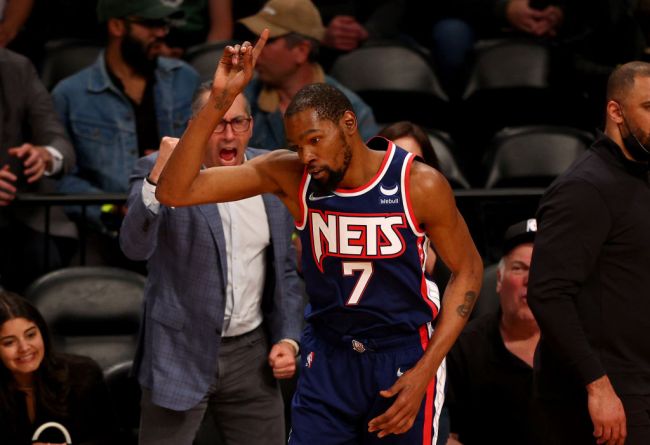 The Brooklyn Nets are in an interesting position right now. Their experiment with Kevin Durant and Kyrie Irving didn’t work out and now they are likely going to lose both this offseason without much to show for their time there.

However, in Durant, they have one of the most assets to ever hit the NBA trade market and it appears they are well aware of that. Yesterday on ESPN, Adrian Wojnarowski laid out what the Nets are looking to get in return for Durant and it is a hefty price tag.

The latest on Kevin Durant requesting a trade from the Nets from @wojespn.

Join us now on ESPN2 for our NBA Today Free Agency special as we break it all down. pic.twitter.com/dsRBjecW8S

It’s difficult to imagine what a team could offer the Nets for Durant that would top the Anthony Davis and Paul George deals.

The trade that sent Anthony Davis to the Lakers saw the Pelicans receive Brandon Ingram, Lonzo Ball, Josh Hart, 3 first round picks, and a first round pick swap. Ball and Ingram were both drafted second overall in their drafts and were still very early in their careers. 2 of those picks have since turned into a 4th overall pick and an 8th overall pick.

The Paul George trade involved an even larger haul for the Thunder. The Clippers sent the Thuner Danilo Gallinari, Shai Gilgeous-Alexander, 5 1st round picks, and the option to swap 2 more first rounders.

Recovering from losing Durant won’t be an easy thing for the Nets to do, but if they can secure a trade offer better than one of those, they’ll be in pretty good shape to begin rebuilding their franchise.