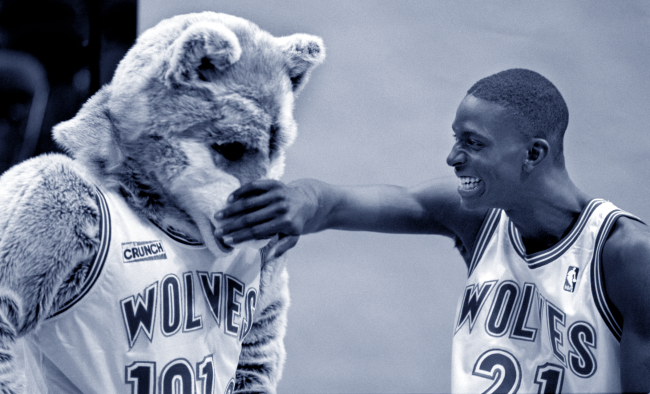 NBA legend Kevin Garnett is being inducted into the Naismith Memorial Basketball Hall of Fame this week. He also released his autobiography KG: A to Z: An Uncensored Encyclopedia of Life, Basketball, and Everything in Between earlier this year.

As such, The Undefeated decided to reprint an excerpt from Garnett’s autobiography in which a then 18-year-old KG, struggling in his attempts to gain admission to college, somehow ended up in a gym playing in a pickup game against Michael Jordan and guarding his basketball idol Scottie Pippen.

At that time, Garnett was having a hard time getting the proper SAT and ACT scores that would allow him to attend a university like Michigan or North Carolina.

The same day he got the results of his test scores, which still weren’t good enough, a friend stopped by and invited him to go play some basketball to help clear his head.

While out looking for a game, his friend suggested sneaking into a Chicago Bulls practice to see if they could get a look at Jordan.

“You know where they’re practicing?” I ask.

Brotha just smiles at me. Brotha knows everything there is to know about who’s hooping where.

“Let’s go down to the Hilton where they got the really nice gym, K.”

When we get in through a side door, Mike Jordan is in there. Scottie Pippen is in there. We watch them play a couple of practice games. I’m just looking at them. I’m just studying them. I’m focused like a muthaf—a.

An hour goes by and a security guy yells at me. Looks like he’s waving me down to the court.

“Throw me my shoes,” I tell my man. I tie up my joints and hurry down to the court.

Pippen says, “You too young to be out here. You just a high school kid.”

Jordan says, “Let’s just go.” Then he points to me and says, “You guard Scottie.”

After Pippen scores on him, KG says his basketball reflexes kicked in and he started throwing down dunks, even getting into it a little bit with his idol Pippen.

“I’m in his face,” writes Garnett. “I’m acting like every moment of my life has led me to this. Scottie may be Scottie, but right now he’s just a hooper I gotta beat to the ball. I’m on fire.”

During a break, none other than Isiah Thomas comes up to Garnett.

“I was trippin’,” he writes, adding that, to a young Kevin Garnett, “Isiah was the real president of Chicago.”

It was then that Garnett figured out his destiny.

“Kevin,” Thomas said to him, “you just took on Scottie Pippen. Scottie’s the best player in the league. Boy, you could play in the league right now.”

While doing what he calls his “due diligence” by reading up on other players who had gone straight from high school to the NBA including Spencer Haywood, Moses Malone, and Darryl Dawkins, Garnett reached out to Bill Willoughby, the last player to make the jump – two decades prior in 1975.

Willoughby, then 38, told an 18-year-old Kevin Garnett, “When you get in the league everything changes. When people look you in the eye, they see dollar signs. No one goes around asking how you’re feeling or how you’re doing. It’s all about how many points you can score. And whether you can get them tickets for the game. For someone who’s only eighteen, it isn’t going to be easy, Kevin. It’s rough. It’s lonely. You don’t have a wife. You won’t have your family. You won’t get a lot of playing time. You gotta be extra strong.”

Garnett told him he was strong, and shortly thereafter he became the first player to go pro straight out of high school in 20 years when the Minnesota Timberwolves took him with the fifth pick in the 1995 NBA Draft.

Oh yeah, about an hour before he left for the draft, Garnett’s high school coach informed him that he had just passed the SAT test.

Read the entire excerpt from Garnett’s autobiography over at The Undefeated.